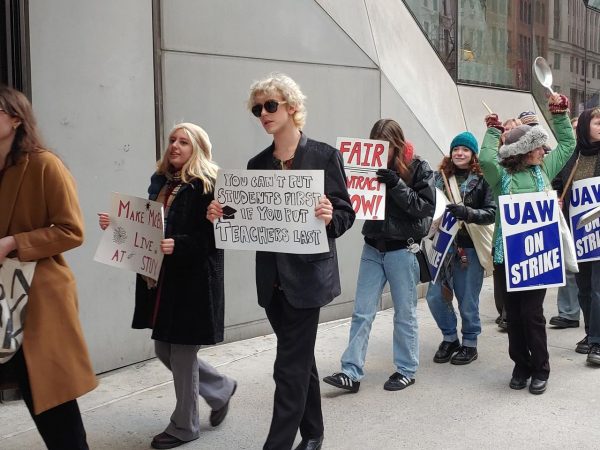 Parsons School of Design, part of Manhattan’s The New School, is under heat as several people, including students and part-time faculty, hit the front lines. Professors have gone on strike to protest unfair working wages. Staff objected to the fact that administrators’ salaries were high compared with faculty, many of whom are part-time. Numerous apprehensive students wonder, “Where does our tuition money actually go?”

A.C.T.-U.A.W. Local 7902, the union organizing the strike, reported that a four-year period has passed since adjunct professors received a raise, and actual earnings are lagging behind inflation – down 18% from 2018. As the fall semester comes to an end next month, professors have stopped grading papers in a pursuit to demand equitable pay that reflects their value. 87% of faculty at the New School are part time and under-protected against cuts to healthcare and third-party protection for discrimination.

At Parsons School of Design, tuition fees for four years of college can easily surpass $200,000. This has encouraged many students to join their professors in this fight despite administrative guidance to continue coursework. However, The New School did make a statement iterating their respect for teachers’ right to protest. On Wednesday, November 16th, nearly 200 demonstrators protested on Fifth Avenue and 14th Street, shouting, “We’re out here fighting for our contracts,” as they held signs that read “Administrative Thievery.”

Knitting and embroidery professor Ms. Larson shared that her income per teaching year comes out to $8,598. She said, “I don’t have a safety net…I live alone in one of the most expensive cities in the world. If I can’t pay my rent or bills, nobody else is stepping in to help.” It is not merely unsung praises being protested; it is the declaration of health and increased quality of life for an entire community of educators.

This push for transparency from the University’s end has been brewing for quite some time. The blurred lines between salaries, benefits, and education at Parsons School of Design are a slice of an even bigger pie trying to combat contentious wages in the education system.