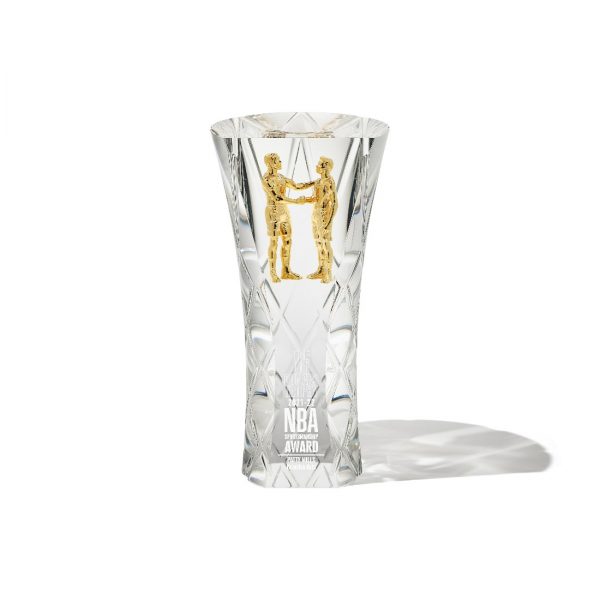 The NBA today unveiled newly created trophies for its season-ending awards. The awards were created in collaboration with the artist Victor Solomon, who had previously assisted the league in redesigning its trophy selections for the NBA’s 75th Anniversary Season.

The former star of the Detroit Pistons, who won the first NBA Sportsmanship award in 1995–96, is honored with the Joe Dumars Trophy. Two athletes shaking hands in esteem are depicted on the trophy.

“Winning the first NBA Sportsmanship Award and being the trophy’s namesake are among the greatest honors of my career,” said Joe Dumars, NBA Executive Vice President, Head of Basketball Operations. “The reimagined trophies represent the enduring legacy of past recipients and are a fitting way to honor those who will continue to raise the standard of excellence in our game.”

The Twyman-Stokes Trophy is given in recognition of Twyman, who helped his friend Maurice Stokes when he sustained an injury during a game and later developed encephalopathy. The trophy, which depicts Twyman supporting and guiding Stokes with his arm, is given to the NBA Teammate of the Year.

The NBA Coach of the Year is honored with the Red Auerbach Trophy, which bears the name of the late Boston Celtics head coach. The trophy displays the well-known sculpture by Lloyd Lillie of Auerbach, sitting on a bench holding a cigar and a game plan.

The Maurice Podoloff Trophy, a new honor instituted by the NBA this season, is given to the club in league with the greatest record after 82 games and is named after the league’s first commissioner. On the trophy’s pedestal, which incorporates the designs of the Eastern Conference posts and Western Conference rings, is a crystal ball divided into 82 panels.

The top front office executive receives the NBA Executive of the Year Award. The well-known pyramid’s five sides represent how the CEO leads the five players on the field as they work together to reach the top.

DJ Quik: I Deserve To Be Where Dr. Dre Is