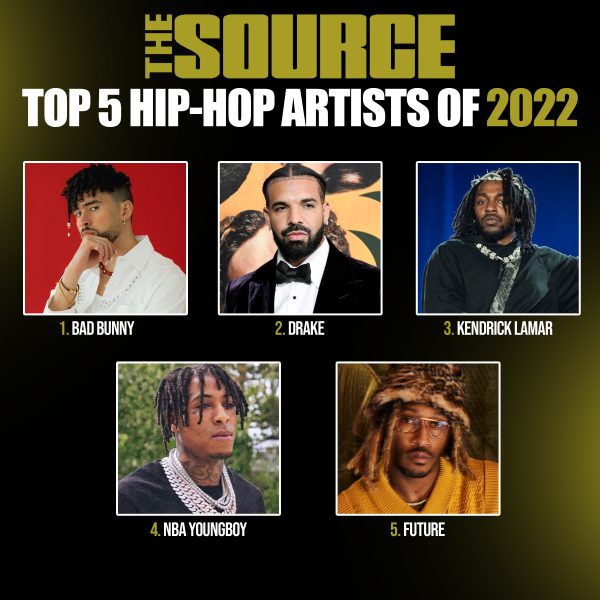 Promising or controversial, Hip-Hop was not short of headlines in 2022. The world’s most popular genre once again reigned supreme on Billboard and streaming charts while holding down its faithful community’s hearts. While everyone’s contributions are notable, a few artists dominate the current landscape. Headlined by Bad Bunny, below are The SOURCE’s five Top 5 Hip-Hop Artists of 2022.

If there is a record meant to be broken, Bad Bunny did it. The Latin Hip-Hop superstar’s Un Verano Sin Ti album sat at the top of the Billboard 200 for 11 non-consecutive weeks. Bad Bunny has the most week at No. 1 in nearly six years, matching Drake’s Views effort of 2016. Bad Bunny was named the year’s Artist of the Year on Apple Music. Un Verano Sin Ti, Bad Bunny’s sixth project in four years and one of the most streamed albums on Apple Music in 2022. More than 18.5 billion plays of Bad Bunny music have been created on Spotify this year, and his album “Un Verano Sin Ti” was the No. 1 most streamed album globally. In 2022, Bad Bunny’s concerts grossed $393.3 million globally, and his North American tour grossed $356.5 million this year.

Drake’s run at the top of Hip-Hop continues to be one of the most impressive we have ever seen. Since his 2009 debut with So Far Gone, Drake has been at or near the top of the game. 2022 was not different for The Boy as he followed up his Certified Lover Boy album with two more, completing a trilogy. First was the dance-infused summer soundtrack, Honestly, Nevermind. If that left a void in the mouths of certain rap fans, he doubled back with Her Loss, a collaborative batch of banners crafted alongside 21 Savage. In addition, Drake made high-profile guest appearances on album’s from DJ Khaled, Future, Jack Harlow, and more. Speaking of the Her Loss album, Drake and 21 Savage had the biggest Hip-Hop first-week debut of the year and made a global No. 1 debut with the “Rich Flex” single. Drake also topped the Beatles for most Top 5 singles in history and is the only rapper with more than 19. Not to mention hitting the No. 1 spot on the Hot 100 twice. It’s Drake’s world; we live in it.

2022 marked the return of Kendrick Lamar, a.k.a. Mr. Morale. Exploding back on the scene with an instant classic in “The Heart Pt. 5,” Kendrick Lamar put the game on notice before any parts of the complete Mr. Morale & The Big Steppers album were played. Follow that with the four-part album of well-crafted music, and what do you get? Album of the year nominations at the Grammys. The album took over the No. 1 spot on the charts, powered by a whopping 300 million-plus on-demand streams. Lamar followed that up with a tour of the same name, which he recently told The New York Times was an aim for “Hood Beethoven.” Mission accomplished.

Love him or hate him, NBA Youngboy is one of the most prolific rappers on the planet. The Louisiana rapper shook off any legal issues to ink a new deal with Motown and flooded his fans with tons of new music, including the recently released Lost Files. The only person who could keep a new Youngboy album off the top of the charts was Bad Bunny. For 2023, Youngboy is eyeing a tour across America.

Already a Rap Icon, Future cemented his status with a stellar 2022. Future ends 2022 with a flurry of RIAA certifications, capping up the best year of his career. I NEVER LIKED YOU, his chart-topping album, becomes one of only four albums to earn platinum status in 2022. “WAIT FOR U,” featuring Drake and Tems, gained triple-platinum status and was named the RIAA’s Top Certified Single of 2022. “PUFFIN ON ZOOTIEZ,” another hit, achieves platinum status. In August, Hip-Hop’s favorite Toxic King notched his 150th career Billboard Hot 100 entry. Future is also the fifth Artist in history to debut at #1 on both the Billboard Hot 100 and the Billboard 200, with I NEVER LIKED YOU topping the 200 and “WAIT FOR U” topping the Hot 100.

The SOURCE’s Top Hip-Hop Stories of the Year

U.S. to Require Negative COVID Tests Before Flights For Travelers From China