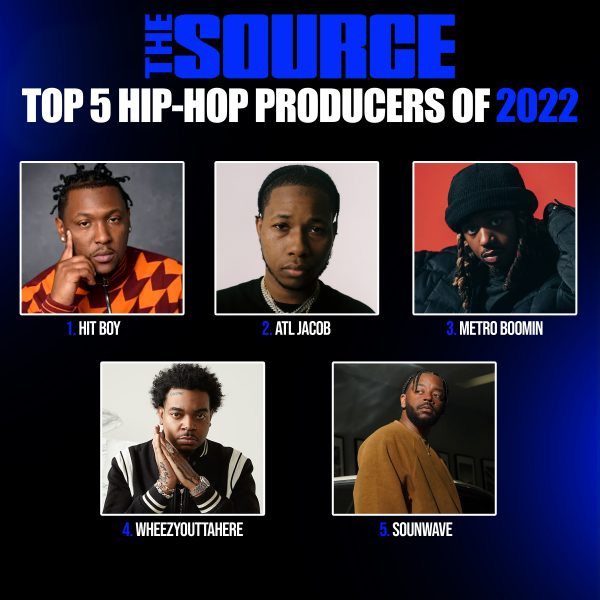 The increasing popularity of hip-hop producers is coming to a fever pitch, with many believing that producers mean more than artists now-in-days. It is no secret that a good producer is a key to making an amazing album. Here are The Source’s Top 5 Producers of 2022.

At the rate Hit-Boy is going, he might run the entire 2020s. Despite having been in the game for several years and producing hit after hit for Kanye, Jay-Z, Beyoncé, Drake, Travis Scott, etc., his work with Nas has proven to be some of his best and most groundbreaking. Since their initial album King’s Disease, released in 2020, the duo has put out two more albums in the series, along with a surprise album, Magic which dropped at the end of 2021. The consistency, quality, and ability to get better with every album are why Hit-Boy is at the top of this list.

ATL Jacob is the newest face on this list and has every right to be. Despite having worked with Young Thug on 2019’s So Much Fun, Roddy Ricch, and  Future on HIS 2019 The WZRD and 2020’s High Off Life, it was his production on Future’s latest album, I Never Liked You which has shot him into the stratosphere. Having produced five tracks off the album, including the hit single “Wait For U” featuring Drake and Tems, Kodak Black’s chart-topping “Super Gremlin,” and even a few tracks on Kanye’s semi-unreleased Donda 2 album, if it weren’t for Hit-Boy, ATL Jacob would be number one on this list.

What can we say about Metro Boomin that hasn’t been said already? The St. Louis native never fails to deliver when it comes to creating a dark and gloomy atmosphere and telling stories with just his beats. His second album, Heroes & Villains, does just that and then some, with Metro pushing himself and his sound, taking elements from the 90’s, and early 2000s Memphis rap and fusing them with his spacy and dark sound. At one point in the album, he successfully pulls off a sample of Peabo Bryson’s “Feel The Fire.” A video would later show that he even opted to use an MPC 2000xl to make the beat instead of FL Studio, which will offer the range he possesses in his beat-making abilities.

WeezyOuttaHere has been a staple producer in the Atlanta rap scene for a while now, closely aligning himself with Young Thug and Gunna, having produced multiple hit tracks off of Thug’s 2019 project So Much Fun, and Gunna’s Drip Or Drown 2, which also came out that same year. Weezy proved himself to be the hitmaker he is once again by producing five track’s off of Gunna’s 2022 project DS4Ever, including the hit single “Pushin’ P” featuring Future and Young Thug, and “Too Easy” featuring Future, and Roddy Ricch on the remix. He continued his run this year by producing three tracks on Future’s I Never Liked You and two on Lil Durk’s 7220 albums.

5. Sounwave
Sounwave, like other producers on this list, might have only produced one album this year, but the album was so good they had to be featured on this list. The TDE go-to producer was extensively featured throughout Kendrick Lamar’s latest album, Mr. Morale & The Big Steppers. Despite the album’s production took a step back when compared to other Kendrick albums, the point of the album was to sound more like a stage play and more cinematic, despite tracks like “Rich Spirit,” “N95,” “Die Hard,” and “We Cry Together.” The quality of the music, its concept, direction, and departure from the contemporary rap sound are why Sounwave is on this list.