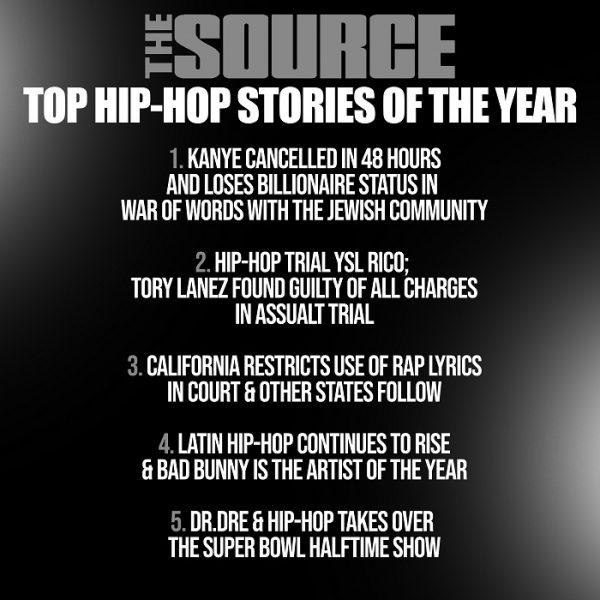 The SOURCE’s Top Hip-Hop Stories of the Year

2022 was a big year in Hip-Hop, and The SOURCE was along with all the news as it broke. Kanye West, YSL, Tory Lanez, Rap Lyrics, and Super Bowl are just the tip of the iceberg. Below are The SOURCE’s Top Hip-Hop Stories of the year.

As year-end honors are being handed out, Kanye West may have one that he wishes to sidestep. Ye has been named Antisemite of the Year by a watchdog group. StopAntisemitism named Ye “the most problematic person of 2022” regarding the group’s mission, corraling 10,000 votes from members. For the last half of 2022, Ye found himself in an endless war with the Jewish community, where he hinged his comments in anti-semitic rhetoric. Ye received the dishonor by announcing love for Hitler, launching attacks on the Jewish community, and also having disparaging remarks about George Floyd. What did that get him? Cut from Adidas, Balenciaga, and other deals resulting in the loss of billions.

Thug and the Young Stoner Life record label members are currently awaiting trial or taking plea deals. At the close of 2022, one trial will be over, and another will stretch into the new year. Young Thug is headed to trial in January on a state RICO case. The team is facing accusations of guns, murder, and more, dominating headliners for the better part of the year.

In addition, Tory Lanez also ran headlines for the second straight year as he approached trial for three separate charges concerning the shooting of Megan Thee Stallion. Lanez faces up to 22 years in prison with these pending convictions. His sentencing is set for January, and he is currently behind bars in Los Angeles.

California Restricts the Use of Rap Lyrics in Court

Gov. Gavin Newsom signed The Decriminalizing Artistic Expression Act, prohibiting songs from being used against defendants. The bill, known as AB 2799, was unanimously approved by the California Senate and Assembly in August. Rap lyrics will no longer be able to be used as evidence in court in the state of California. Rappers Killer Mike, Meek Mill, Too $hort, Ty Dolla $ign, YG, E-40, and Tyga spoke at a virtual bill signing ceremony on the significance of the law, along with CEO of the Recording Academy Harvey Mason Jr. Leaders from Songwriters of North America and the Black Music Action Coalition also attended the signing ceremony. More on this here.

Daddy Yankee did a victory lap retirement tour grossing nearly $198 million, Anuel AA is rising, and then there is the titan of Bad Bunny. To show you why Bad Bunny is the hottest on the planet, his Un Verano Sin Ti album sat at the top of the Billboard 200 for 11 non-consecutive weeks. Bad Bunny has the most week at No. 1 in nearly six years, matching Drake’s Views effort of 2016. Bad Bunny was named the year’s Artist of the Year on Apple Music. Un Verano Sin Ti, Bad Bunny’s sixth project in four years and one of the most streamed albums on Apple Music in 2022. More than 18.5 billion plays of Bad Bunny music have been created on Spotify this year, and his album “Un Verano Sin Ti” was the No. 1 most streamed album globally. In 2022, Bad Bunny’s concerts grossed $393.3 million globally, and his North American tour grossed $356.5 million this year.

The Pepsi Super Bowl LVI Halftime Show was an instant historic moment in Hip-Hop history. The set kicked off with Dr. Dre sitting at an enormous mixing board before “The Next Episode” kicked off, sending the stadium into an uproar. Following his group that featured Mary J. Blige, Snoop Dogg, Kendrick Lamar, Eminem, and special guests 50 Cent and Anderson. Paak, Dre received an increase of nearly 185% in the first hour following the game. Tracks from the halftime show also witnessed a significant rise in global Spotify streams after the show. Including in the surge was a nearly 520% increase in Mary J. Blige’s “No More Drama,” more than a 270% increase in Dr. Dre, Snoop Dogg’s “The Next Episode,” plus more than a 245% increase in “Still D.R.E.” and 250% increase of Kendrick Lamar’s “Alright.”