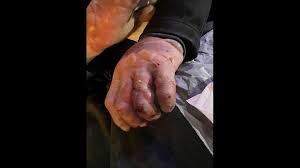 Sha’Kyra Aughtry has been deemed a hero after saving a elderly stranger in the buffalo blizzard that reached 51 inches.

Aughtry and her boyfriend helped bring Joe White into their home saving his life after he got stuck walking home in the storm. He was crying for help when Aughtry heard him. He had “big ice balls” and gangrene on his hands. The mother of three panned the video camera to show White’s injuries. She explained she had to cut the handles of a shopping bag White was carrying that had become stuck to his hands. She also used wire cutters to cut a ring piercing through his skin. The man had a disability and his condition appeared to be deteriorating so went on Facebook live to ask for assistance. The good Samaritan showed herself feeding white and pleading for help.

“I currently have [an] older 64-year-old white man in my house. I found him yesterday. I heard him screaming for help on my street. I’m looking out the window, when I looked out the window, he was getting blown up and down the street. It was out of control,” Aughtry said in her 15-minute live video.

“He needs medical attention!” Aughtry pleaded. “I’ve had this man since 6:37 in the morning of the 24th.”

Less than an hour after her first live post, Aughtry shared another live video, showing several men she referred to as good Samaritans helping her transport White to the Erie County Medical Center near her home.

“I got some guys just carrying him right now. I just want to show you all that I wasn’t exaggerating. They came in, they plowed out my house. They getting him in [to a waiting truck], I’m right here Joe” Aughtry shared as she rode to the hospital with Joes. White mustered to say ‘I love you’ to Aughtry to which she replied,’I love you too sweetie!’

Sha’Kyra Aughtry is an excellent example of pure unadulterated love.
Would you do the same?