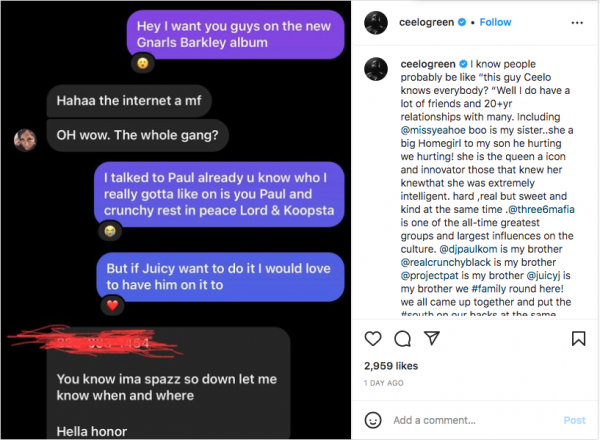 According to numerous confirmed reports, Dungeon Family’s CeeLo Green had planned to collaborate with Gangsta Boo and Three 6 Mafia on the new Gnarls Barkley album and reached out to Boo about the collab just days before her untimely death.

Green unveiled the plan shortly after Boo’s passing, sharing the messages between him and the 43-year-old Memphis rap legend on Instagram.

“Usually I wouldn’t post something this intimate but I did want y’all to know the whole gang was gonna be on the new #gnarlsbarkley album,” he wrote. “I know you fought sis we love you unconditionally and we still gone ride for you baby boo. #rip #memphis stand up and honor the queen!”

An official cause of death has not been confirmed, but GB’s mom, Veronica Mitchell, issued a family statement, saying, “The Mitchell family would like to thank everyone for their condolences regarding the untimely death of Lola ‘Gangsta Boo’ Mitchell. The family is asking for your continued prayers and privacy as we process the loss of our loved one.”