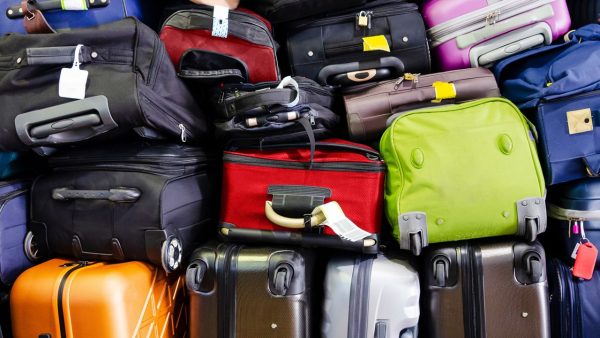 Trouble with checked luggage at the airport is a headache that is becoming increasingly unavoidable. Valerie Szybala, a disinformation researcher from Washington D.C., received her lost luggage nearly six days after the airline told her that the bag was safely at its distribution center. During those days, Szybala tracked the luggage as it journeyed to local malls and McDonald’s.

The bag appeared to be located at someone’s home — an apartment complex where Szybala says she found other emptied and discarded suitcases near the trash.

Szybala had taken her first international trip in several years to spend a month abroad. On December 28, she was flying back to D.C.’s Reagan Airport when she bought an Apple Airtag tracking device for the trip.

“I’d heard that it was a thing,” she says of 2022’s travel trend of putting tracking devices in luggage to find bags in the event that they get lost. “I had a layover scheduled, so I knew the potential for the bag to get lost was high,” said Szybala.

Certain variables of the missing bag equation were not weighed highly enough. The weather, “implosion of Southwest Airlines, and the process to come would’ve likely prevented numerous travelers from checking bags.” In addition, although she was flying United, her layover was via a Southwest hub. She was informed that her bag did not make it by the United app and decided to trust that the app relayed the proper information stating the location of her bag and the return date.

The bag arrived in D.C. the next day, December 29, but was returned to the owner for another 4 days. United offered to have the bag delivered directly to Szybala’s home, and she took them up on the offer. “That’s where I made a big mistake, letting them hand it to a third party,” she says. The road ahead was plagued with waiting and false reassurance.

On Friday, December 30, at 8pm, Szybala knew something was wrong when she tracked her back via Airtag to an apartment complex a couple of miles away from her residence.

“I was trying to contact them every day but the hold time on the phone was incredible, I never made it, and through the chat on the app the wait time was two to four hours. But I did it every day and they were reassuring me that the bag is coming, it’s in our system, it’s safe in our service center, it’ll be delivered tonight. But that was never true,” she said.

The next day she watched her bag travel twice to McDonald’s and a nearby shopping center in the suburbs.

Despite all evidence, officials insisted that the bag was in their distribution center, and one even told her to “calm down,” according to the screenshot of a chat she posted on Twitter.

After days of growing impatient, Szybala decided to visit the apartment complex where her Airtag was. Her first trip on Friday night didn’t turn up her bag — but she says she did find two other suitcases with luggage labels, opened and emptied beside the trash cans. One still had its owner’s details on it. Szybala emailed them to ask if their case was missing but has yet to hear back.

“When I found the empty suitcases out by the dumpsters is when I got worried. And United was lying to me so I took it to Twitter,” she says. Her January 1 picture of the suitcases by the dumpsters has racked up over 21 million views. She also called the police when she found the cases by the trash, but says they “weren’t able to help much” since she couldn’t pinpoint the exact apartment it was in.

Szybala was determined to get her back enough to turn down United’s Twitter team’s suggestion to file a reimbursement claim. She persistently kept tweeting, kept logging the bag’s location as it ‘visited’ places including a “European Wax Center” and a McDonald’s, and kept visiting that apartment complex as it returned ‘home.’ On her fourth visit, already viral by then, she was accompanied by a local TV crew.

“We wandered round the garage again, this time with a local resident who’d seen my Twitter thread. The other bags [by the dumpsters] were gone. The resident who came to help said they’d seen someone taking them inside. We were peeking in trunks trying to find [my case]. Then when I went outside I had a text from a courier saying he had my bag and was just around the corner. He met me in front of the building and brought my bag with him,” she told CNN.

The bag still carried her luggage label, extra ID tag, and all contents were in tacked. Szybala further informed Twitter that the courier was in an unmarked car, not an official van, and wasn’t wearing any kind of uniform. He told her that her bag had been misdelivered to the Virginia suburbs, then collected again and delivered to the apartment complex in question.

United Airlines told CNN in a statement: “The service our baggage delivery vendor provided does not meet our standards and we are investigating what happened to lead to this service failure.” They didn’t address the behavior of their own staff who repeatedly told Szybala that the suitcase was in United’s distribution center when in fact it was ambling around the D.C. suburbs. Szybala has further taken to Twitter to express her gratitude for the Apple AirTag in this incident.