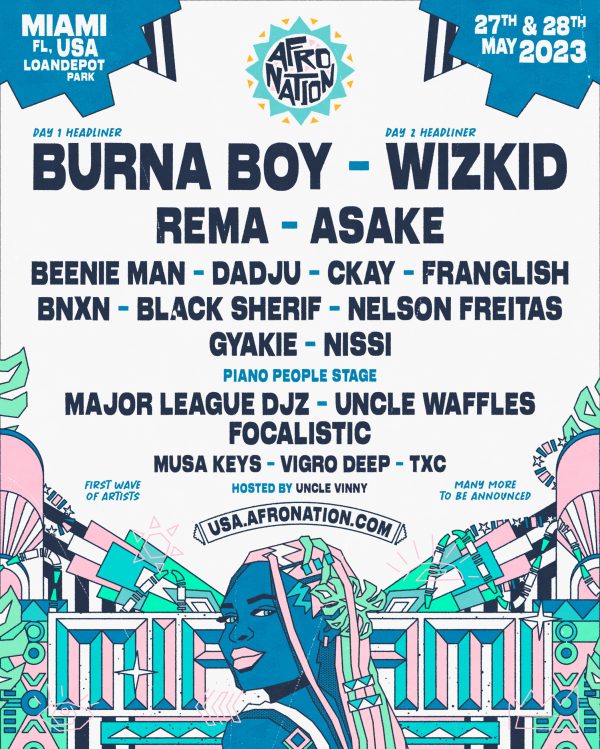 The largest exhibition of one of the fastest expanding genres in the world is held at Afro Nation. Afro Nation takes the next step with Afro Nation Miami 2023, its first festival in the continental United States, after a string of lucrative events in Africa, Europe, and the Caribbean.

The forthcoming Afro Nation festival in Miami will feature the greatest in Afrobeats, dancehall, hip-hop, amapiano, and other Black-led musical genres, just like previous Afro Nation gatherings. Afro Nation Miami arrives at LoanDepot Park on May 27 and 28, 2023, headlined by Afrobeats royalty Burna Boy and WizKid and showcasing a potent array of performers from Africa, the Caribbean, and around the world.

The impressive lineup of Afro Nation Miami showcases the breadth and power of international Black music. Burgeoning Nigerian superstars Rema and Asake, dancehall icon Beenie Man, rising African sensations CKay, BNXN, and Black Sherif, French rapper Franglish, and many others are scheduled to perform at the inaugural Miami event. Afro Nation Miami delivers the Piano People stage, headlined by Major League DJZ and Uncle Waffles and featuring many more of the genre’s most intriguing artists, shining a special spotlight on the emergent genre of amapiano, born in South Africa. Keep an eye out for the addition of many more performers to the schedule in the upcoming months.

You can see the lineup below. On Friday, Jan. 13th, general tickets will go on sale at 1 pm ET.