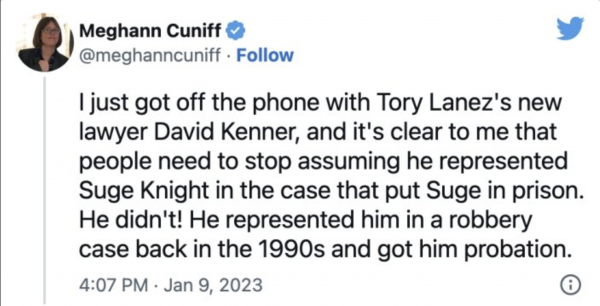 As previously reported, recently convicted rapper Tory Lanez has hired renowned criminal defense attorney David Kenner, the lawyer who famously represented the Death Row roster, to argue his case while in the appellate phase of his case. Even there are several pictures that contradict Kenner’s new claim, but he contends that he never represented Suge Knight in the hit-and-run case that killed Terry Carter and sent him to prison for 28 years.

Law & Crime reporter Meghann Cuniff broke the news about Lanez hiring Kenner and simultaneously touched on the fact that Kenner did not represent Knight in his hit-and-run case, but in a a robbery case in which the former Death Row CEO received probation.

Lanez appeal has yet to be scheduled, but with kenner’s track record and the controversy surrounding his trial, there’s a possibility that Lanez could be out of jail sooner than expected.