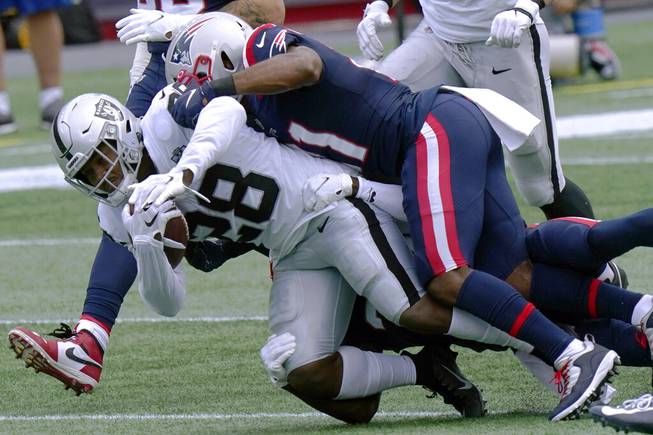 Everything the Raiders emphasized in training camp and executed en route to a 2-0 start, they eliminated in a 36-20 loss to the New England Patriots Sunday morning.

The first loss since the franchise’s move to Las Vegas is a tough one to swallow because the Raiders had a better chance than the final score indicated. They did some positive things before the game spiraled out of reach, but old habits that they appeared to have broken since their relocation reared themselves again.

The Raiders compiled too many penalties, committed too many turnovers and minimized too many scoring chances. Add in the first missed field goal of the season and the first time they’ve been outscored in the third quarter, and it’s enough to lose to any team in the NFL — let alone one of the best teams.

The Patriots didn’t put on a vintage performance — the Raiders held a 6.7-6.1 yard per play edge — but the compounding of Raiders’ mistakes help save them. Las Vegas had to fly across the country on a short week off of a Monday Night Football victory, and whether the condensed schedule was a factor or not, it wasn’t at its sharpest from the onset.

The Raiders extended the Patriots’ second drive when Maxx Crosby fell for a hard count and jumped offsides on a 4th-down with the punt team on the field. Officials later flagged Crosby for an illegal hands to the face call, and he wasn’t the only offender.

Las Vegas’ six penalties, for a total of 40 yards, may not sound like much but they made for a season high and seemed to come in high-leverage situations. So did the turnovers.

Las Vegas took control in the first quarter when it went on an imposing 8-play, 77-yard drive down to New England’s 12-yard line. But then Josh Jacobs, who had 71 yards on 16 carries, fumbled when Shilique Calhoun punched the ball out from behind.

The collective groans from *another* controversial fumble call going for the Patriots and against the Raiders could practically be heard all the way from the Strip to Jack London Square. The fanbase heartache was an appropriate feeling on this afternoon.

From bad luck to faulty execution, this too often felt like the same ol’ Raiders.

Finishing drives and improving red-zone performance was coach Jon Gruden’s foremost focus coming into the season, and Las Vegas managed to score touchdowns on six of eight possessions that reached the opponent’s 20-yard line in the first two weeks. It went only 2-for-5 against New England.

A secondary stress of Gruden’s was better play out of the locker room post-halftime. Similarly, the Raiders outscored the Panthers and Saints by a combined 17-0 the last two weeks before it flipped on Sunday and the Patriots posted a 10-0 edge.

The Raiders should have scored at least three points, but kicker Daniel Carlson shanked a 41-yard field goal. After the miss, the Patriots realized they could run all over a porous Raiders’ defense and proceeded to boost their rushing totals to 250 yards and 6.6 yards per carry.

Injuries didn’t help, as middle linebacker Nick Kwiatkoski missed his second straight game as expected. A case could be made that Kwiatkoski is the most important player to the Raiders’ defense, but a healthy defensive line against a beaten-up New England front should have maintained better control of the line of scrimmage.

Free-agent acquisition defensive tackle Maleik Collins failed to look like the gamechanger the Raiders’ coaching staff has made him out to be. Former No. 3 overall pick Clelin Ferrell made a few plays early but otherwise revived his troubling disappearing act.

The loss wasn’t all on the players. Gruden made his miscues too, namely trotting out Carlson too liberally.

In this golden age of information and data, no coach should be foolish enough to sacrifice such a large chunk of win probability with a decision rooted in classic, over-conservative thinking.

Gruden often places blame on his own shoulders and pledged coming into the season that he needed to be better. The Raiders improved on everything he preached in their first two games.

They’ll need to get back to it going forward.

Raiders get run over at New England