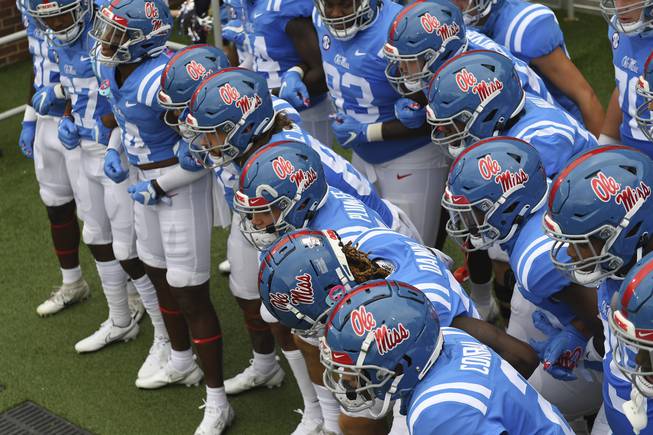 College football by the odds: Vegas picks and preview of every Week 5 game

Mississippi players prepare to take the field before the first half of an NCAA college football game against Florida in Oxford, Miss., Saturday, Sept. 26, 2020.

A failed two-point conversion attempt and a declined opportunity to kick an extra point with time expiring condemned me to a losing Saturday last week.

Not both of those things, mind you, as I only needed one to eke out a profit. I’m not sharing the endings of Ole Miss’ 51-35 defeat to Florida and TCU’s 34-31 loss to Iowa State for pity; I’m sharing them as an illustration for how slim the margins can be in sports betting.

There’s often not all that much of a difference between a wildly successful week and a slight loser, at least not on the field. All bettors can do is follow their process, bank the best numbers — something I didn’t do last week in playing TCU at +2.5 when it closed +3.5 — and hope it pays off over the long haul.

Read below for this week’s picks, separated by conference and labeled by three different confidence categories. Lines are the best currently available in Las Vegas on the chosen side.

Memphis -2.5 at SMU, over/under: 74. SMU already had a continuity edge with coach Sonny Dykes returning as opposed to Memphis breaking in Ryan Silverfield, but now the Tigers have bigger problems. They were forced to take three weeks off, including a portion of it without practice, following a coronavirus outbreak. Play: SMU +2.5.

South Florida +21 at Cincinnati, over/under: 46.5. Coach Luke Fickell has turned the Bearcats into a consistent machine in his fourth year while Jeff Scott is starting a total rebuild with the Bulls. Cincinnati’s methodical approach makes it hard to lay a big number, but it has to be the pick unless the number goes higher. Guess: Cincinnati -21.

Tulsa +21.5 at UCF, over/under: 72. The Golden Hurricane’s defensive front kept them in the game in a narrow 16-7 loss to Oklahoma State two weeks ago. But UCF’s highly efficient, quick strike passing game should be the antidote to the pressure. Guess: UCF -21.5.

Virginia Tech -11.5 at Duke, over/under: 54. It’s probably best to exercise some caution as the coronavirus continues to infect the Virginia Tech roster, but the Hokies will be scary when they get to full strength. Scratch that, they might already be scary considering they crushed NC State without half their starters and Duke isn’t any better. Lean: Virginia Tech -11.5.

North Carolina State +14 at Pittsburgh, over/under: 47.5. The Wolfpack’s season-opening win over Wake Forest might be looked back on as an anomaly because, as their 45-24 loss to Virginia Tech as 6.5-point underdogs last week showed, they have holes all over the roster. This line should close on the other side of 14. Guess: Pittsburgh -14.

Virginia +28 at Clemson, over/under: 55. Clemson is still being priced like it’s the wrecking ball of the past few years, but the Tigers need some time to prove they’re still on that level. An inexperienced receiving corps and defensive backfield are just two reasons to avoid paying a premium on Clemson early in the season. Guess: Virginia +28.

Boston College +14 at North Carolina, over/under: 54. Number is right, but I’m high on new Boston College coach Jeff Hafley and think this number could be as much as four points lower if not for the Eagles’ disappointing 24-21 win over Texas State last week. Worst-case scenario, there could be some backdoor possibilities. Guess: Boston College +14.

Texas Tech +2.5 at Kansas State, over/under: 54. Hot take: Texas Tech’s near-upset of Texas last week was more impressive than Kansas State’s actual upset of Oklahoma. The Wildcats had every break fall for them, including a +4 turnover differential, while the Red Raiders had to overcome a lot of hurdles, including a -1 turnover differential, to hang with the Longhorns. Lean: Texas Tech +2.5.

Oklahoma -7 at Iowa State, over/under: 63. Series history holds little predictive value, and yet Iowa State’s recent success against Oklahoma — the Cyclones have covered four straight against the Big 12 overlord and won one outright — seems to be suppressing this number. Despite their loss last week, the Sooners should be laying at least 7.5. Guess: Oklahoma -7.

TCU +11.5 at Texas, over/under: 63. Both defenses were exposed last week, but TCU giving up more than 8 yards per play in a 37-34 loss to Iowa State was more concerning. Texas’ offense blows away Iowa State’s in terms of talent. Guess: Texas -11.5.

Oklahoma State -21.5 at Kansas, over/under: 54. The betting market is getting closer but still struggling to capture the pure incompetence of Kansas. The Jayhawks are 0-2 against the spread and failed to cover by an average of 18 points in those two losses. Guess: Oklahoma State -21.

Baylor -3 at West Virginia, over/under: 48.5. Continuity and a strong homefield regardless of the current situation sit in West Virginia’s favor; talent and upside are higher with Baylor. This looks like a good one to pass on. Guess: West Virginia +3.

Charlotte +6.5 at Florida Atlantic, over/under: 60.5. The virus kept both teams out of action the last two weeks, but at least Charlotte got one game in — a 35-20 loss to Appalachian State as 16-point underdogs earlier this year. The 49ers also have a coaching/infrastructure edge with Will Healy in his second year against Florida Atlantic’s debuting Willie Taggart. Lean: Charlotte +6.5.

Western Kentucky -7 at Middle Tennessee, over/under: 54. Don’t let a couple subpar performances, against highly talented Louisville and Liberty offenses no less, distract away from the fact that Western Kentucky has one of Conference USA’s best defenses. The Blue Raiders shouldn’t be able to move the ball much. Guess: Western Kentucky -7.

UTSA +20 at UAB, over/under: 54.5. UTSA sits at 3-0, but it’s arguably been outplayed in all three games. UAB is the most consistent if not talented team in the conference, making this a complete mismatch. Guess: UAB -20.

Southern Miss +1.5 at North Texas, over/under: 71.5. Southern Miss’s depth has been sunk to the coronavirus while it breaks in a new coach, and North Texas has been arguably the most disappointing program in the nation dating back to last year. The next time I bet either one of these two teams will be too soon. Guess: Southern Miss +1.5.

Louisiana Tech +24 at BYU, over/under: 59.5. BYU is beating teams so senseless that the market is having a tough time catching up to its efficiency. There’s not much of a reason to see why a green Louisiana Tech team that’s in the nation’s bottom 10 in returning production shouldn’t be another victim. Lean: BYU -24.

Navy -7 at Air Force, over/under: 46.5. No statistical model is going to be able to justify this high of a line, but there are extenuating circumstances here. Air Force lost as many as 40 players who opted to sit out and preserve a year of eligibility when it looked like there wouldn’t be a season. There are too many variables to get involved here. Guess: Navy -7.

South Carolina +18 at Florida, over/under: 57.5. This number is inflated after Florida’s offense went up and down the field in a 51-35 victory last week. South Carolina’s defense is a marked step-up, as it not only returns more players from last year than Ole Miss but also performed better against a tougher schedule. Play: South Carolina +18.

Texas A&M +18 at Alabama, over/under: 52.5. This line screams of an overreaction to the Aggies’ sleepy 17-12 win over Vanderbilt as 31.5-point favorites last week. Texas A&M played sloppy and stayed vanilla but still outgained Vanderbilt by 3 yards per play and should be sharper against an Alabama team it’s spent a month preparing for. Lean: Texas A&M +18.

Missouri +12.5 at Tennessee, over/under: 48.5. Yes, it mostly came against Alabama’s backups but new coach Eliah Drinkwitz showed the offensive creativity that should make Missouri fans excited about his arrival in a comeback cover, 38-19 loss as 28-pont underdogs. The Volunteers haven’t shown enough to be trusted laying double digits against a decent opponent yet. Lean: Missouri +12.5.

Arkansas +17.5. at Mississippi State, over/under: 68.5. I’m not putting too much stock into Mississippi State’s 44-34 win over LSU as 14.5-point underdogs last week, as it was a perfect season-opening spot. Arkansas’ defense is far more experienced, and maybe even better after it helped the Razorbacks hang with Georgia for most of a 37-10 loss last week. Lean: Arkansas +17.5.

Auburn +7 at Georgia, over/under: 44.5. More time and datapoints are needed to feel comfortable assessing either of these relatively new-look teams. Neither side inspired much confidence offensively last week, but only one of them is being asked to lay a touchdown in what should be a low-scoring game. Guess: Auburn +7.

LSU -21 at Vanderbilt, over/under: 51. The caliber of athletes couldn’t be any more lopsided here, as LSU’s problems a week ago were mostly related to youth. The Tigers are far faster and stronger than the Commodores at every position. Guess: LSU -21.

Georgia Southern -20 at Louisiana-Monroe, over/under: 49.5. This number is too high, especially in what should be a low-scoring game. And yet, the Warhawks have so clearly been the worst team in the nation that I can’t talk myself into picking them. Guess: Georgia Southern -20.