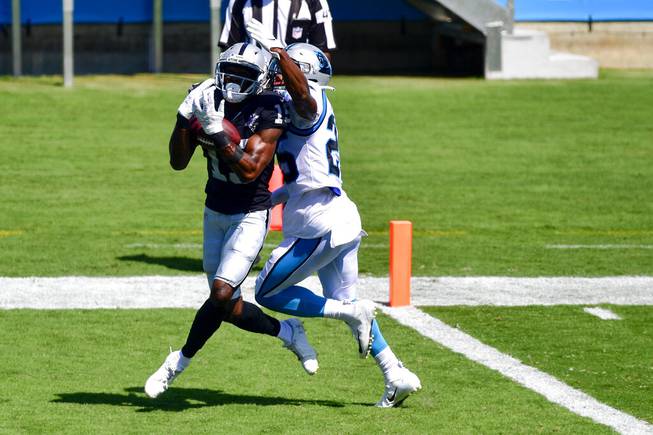 The second-ever game at Allegiant Stadium features the conclusion of the Raiders’ two-week tour of AFC East championship contenders. Part 1 didn’t go so well, as Las Vegas looked rusty on the road in New England as it allowed the Patriots to run all over them en route to a 36-20 victory. The Bills arguably present even more problems. They have one of the most well-rounded rosters in the NFL with high-level talent at every position group. The big question coming into the year was if Buffalo could get the quarterback play to match. So far, the answer has been a resounding yes. Third-year passer Josh Allen appears to have fixed some of his accuracy issues and has taken the NFL by storm. Buffalo has won each of its first three games largely by virtue of Allen sitting second in the league with 1,038 passing yards and 9.1 yards per attempt. The University of Wyoming product has also completed 71.1 percent of his attempts and thrown for 10 touchdowns to one interception.

For the second straight year, stopping the run appears to be the Bills’ Achilles heel. They’ve allowed 4.4 yards per rushing attempt dating back to last regular season to rank 20th in the NFL. That’s perfect for the Raiders, which want to employ a rush-first attack. And they want to do it not only with workhorse back Josh Jacobs. Backups Devontae Booker and Jalen Richard have also been productive on the ground, averaging nearly 8 yards per attempt on an albeit limited 13 carries. The Bills have been leading for the vast majority of their time on the field this year, so their shaky rush defense hasn’t hurt them much yet. But if the Raiders can build a fourth-quarter lead, they should have a great chance to ice the victory behind Jacobs and his cohorts.

Much of the Bills’ shortcomings against the run are self-inflicted and a result of taking a more modern roster-building approach and prioritizing defensive linemen who specialize in pressuring the quarterback more than clogging run lanes. Every player that rotates in among the Buffalo front seven is capable of wreaking havoc in the passing game by collapsing the pocket. The beaten-up Raiders’ offensive line will have its hands full. Las Vegas had done well navigating a rash of injuries up front, including to mainstays Trent Brown and Richie Incognito, through two weeks but regressed against the Patriots. They allowed quarterback Derek Carr to get hit seven times, included getting sacked twice. Rookie guard John Simpson was a particular liability and could be targeted by the Bills again if he’s in the lineup.

Ever since the Raiders signed the veteran receiver to a one-year deal at the start of free agency, coach Jon Gruden has been his biggest cheerleader. Gruden, who’s known Agholor since the receiver was a high school standout in Tampa, Fla., has characterized the former Philadelphia Eagle as underrated, reliable and explosive. Now the 27-year-old Agholor will have a chance to prove it himself. With rookie starters Henry Ruggs III and Bryan Edwards both expected out with injuries, Agholor will be the Raiders’ featured receiver against the Bills. He’s excelled in limited action so far, hauling in four of five targets on the year for 71 yards including a go-ahead touchdown in week 1 against the Panthers and a key third-down conversion in week 2 against the Saints. Agholor had a couple high-profile dropped passes during his time with the Eagles, and perhaps unfairly, that’s what he’s been most known for in the NFL. A bigger role with the Raiders allows Agholor a chance to rewrite his reputation.

• “This guy has incredible passing ability. He throws it everywhere. He might throw it out of the stadium if they let him. This guy is really hot right now.” -Gruden on facing Allen

• “Shoot guys, I have to have dinners and dates with my wife at the house. I haven’t taken her out to eat all season, and that’s (three) kids running around my house. I think she’s ready for a date.” -Quarterback Derek Carr defending the safety measures he’s taken after receiving criticism for not wearing a mask at a charity event

• “It’s definitely an advantage, especially for him. He’s very familiar with them. I’ll pick his brain and we’ll get prepared together.” -Agholor on Zay Jones going up against his former team

• “I know he’s top five in receiving yards right now, which just makes me more excited to go against him. It’s going to be a competitive matchup.” -Cornerback Trayvon Mullen on covering Bills receiver Stefon Diggs

Number of deep completions, which Pro Football Reference defines as passes that travel at least 15 yards in the air, by Allen. That leads the NFL with the second-place quarterback, Atlanta’s Matt Ryan, three completions behind him. Buffalo’s vertical attack is going to present a new challenge for the Las Vegas secondary after its first three opponents focused almost exclusively on short passing. Discipline will be key, as cornerbacks Trayvon Mullen and Nevin Lawson will need to stick tightly to the receivers they’re covering and free safety Erik Harris must not be caught out of position deep.

Best Bet: Josh Allen will throw an interception at -150

Allen has been exceptional for three games, but it’s important to remember that it’s just three games. He’s made 28 other starts before this season that were, for the most part, much rockier. Recent performance is important, but a larger sample always holds more predictive value. Last year, his odds were closer to -200 to throw an interception in any given game. This is too much of an adjustment downwards. Allen is also fortunate to have only thrown one interception so far this season, as opponents have dropped three others. Want a specific player? It’s not needed for this prop bet, but look for Mullen or linebacker Cory Littleton to claim their first takeaway of the year off of Allen.

Instant Analysis: Raiders are a mess in 30-23 loss to Buffalo