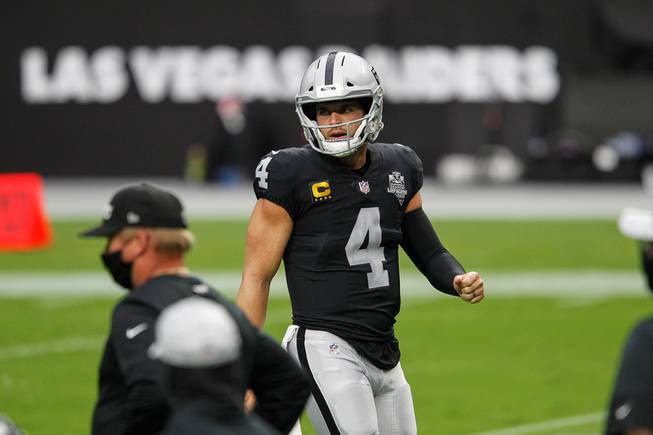 With Ruggs running deep, Carr looks like a new man

Derek Carr has a reputation around the NFL, and it’s not exactly flattering.

The word on the seventh-year Raiders quarterback is that when given the choice between pushing the ball down the field in pursuit of a substantial gain or taking a short, easy completion, Carr will always choose the safe option.

It’s a rep that is borne out in the statistics, as Carr usually ranks near the bottom of any category that measures depth of targets. The nadir may have come in Week 3 at New England, when Patriots coach Bill Belichick unveiled a defense in which they actually bracketed Carr’s checkdown option on third down.

The unorthodox strategy worked; the Las Vegas offense was thrown out of rhythm and Carr took a sack amid the confusion. That was the book on Carr: Take away his safety-valve receiver and watch him panic.

And yet, there was Carr on Sunday, eschewing checkdowns in favor of deep bombs as he gunned the Raiders to a stunning 40-32 win at Kansas City. Carr threw for 347 yards and three touchdowns on the day and looked nothing like the soft-tosser who averaged 7.6 yards per attempt over the first four weeks.

So what was the difference? To put it simply, Carr played like a different quarterback because he had rookie receiver Henry Ruggs.

Ruggs only made two catches on the day, but they were impactful, as he hauled in a 46-yard reception in the first quarter and a 72-yard touchdown strike in the second. Those are exactly the kind of game-changing plays that have been missing from the Raiders offense under Carr, and his checkdown rep may have played a part in opening up the field for Ruggs.

The first bomb to Ruggs wasn’t about scheme — it was about Ruggs being the fastest player on the field.

On a 3rd-and-10 on the Raiders’ first possession, Ruggs raced past a cornerback in zone coverage, and Carr led him down the sideline. By the time the safety helped, the ball was already there and Ruggs was in better position to go up and high-point it for a 46-yard gain:

That’s a credit to Ruggs’ explosiveness down the field and his athleticism at the catch point.

The second big-play hookup between Carr and Ruggs was also interesting in that the Chiefs defense got burned by playing to Carr’s reputation.

Kansas City blitzed six rushers on the play and left four cornerbacks in man-to-man pass coverage. The lone safety was Dan Sorensen, who was tasked with covering the deep middle. At the snap, Ruggs attacked the outside from a tight bunch while Hunter Renfrow released inside on a slant; Sorensen chose to creep up to take away the short option, probably figuring that Carr would lock in on Renfrow (or even running back Josh Jacobs, who eventually stayed in to pick up the blitzing linebacker and did a decent job of it).

Once Sorensen committed to the short route, Ruggs ran past his man and snapped his route inside, where the entire middle of the field was vacated. Carr only had to loft a pass in his general vicinity, and there was enough open space for Ruggs to make the catch and turn on the jets for the long touchdown:

The Chiefs gambled based on Carr’s tendencies, and he made them pay. Now it will be interesting to see how defenses respond now that the Raiders have put plays like this on tape. Will opposing defensive coordinators continue to emphasize eliminating the short game? Or will they keep more defenders back deep out of respect for Ruggs’ playmaking ability?

If it’s the latter, that will put the ball in Jon Gruden’s court, as he and Carr will have more room than ever to work the short and intermediate game.

When the Raiders drafted Ruggs 11th overall (with every receiver still on the board), that’s what Gruden and Mike Mayock had in mind. They wanted a player who could transform the Las Vegas passing game, and, when healthy, it appears Ruggs can do that.

‘Forever a Misfit’: Schmidt deal was necessary, but tough, for Golden Knights