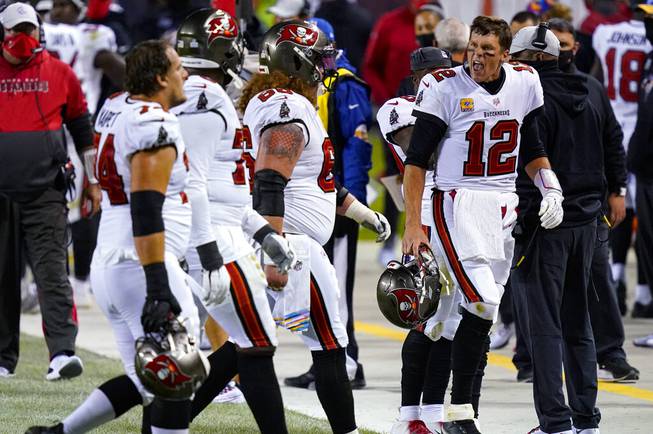 Lost in all the talk of the lopsided over/under results so far this season has been the symmetry of point-spread results.

Covers by three straight teams taking points to finish Week 5 — the Minnesota Vikings against the Seattle Seahawks, the Los Angeles Chargers against the New Orleans Saints and the Tennessee Titans against the Buffalo Bills — nearly pulled underdogs even with favorites against the spread on the year. Through 75 games on the year, favorites have now gone 38-36 versus the number with one game closing pick’em.

Overs still hold a 44-31-2 lead in totals, but a 7-7 week has things evening out slightly. That’s how this tends to work; results will always regress to the mean over the long term.

A regression to the mean would unfortunately represent an improvement for my plays, which had another losing week in Week 5. It’s a long season and I haven’t lost hope yet — especially not with a solid 42-34-1 overall record picking every game — but I need to get this turned around. I’m confident it can happen in Week 6.

Read below for picks on every Week 5 game, separated into three confidence categories and listed in rough order of confidence. Lines are the best currently available in Las Vegas on the chosen side.

Pittsburgh Steelers -3 vs. Cleveland Browns The Browns have run all over their last four opponents, but that’s not going to work against the Steelers. Pittsburgh sits first in the league against the run, according to Football Outsiders’ DVOA ratings.

San Francisco 49ers +3.5 vs. Los Angeles Rams The lookahead line on this game a week ago was San Francisco -3, making this as large of a shift as you’ll ever see in one week. This is the ultimate buy-low on the 49ers and a way to back one of the NFL’s best coaches, Kyle Shanahan, at a bargain, even with a heavily injured team.

Houston Texans +3.5 at Tennessee Titans Despite how the scores and narrative may make it sound, the Texans’ 30-14 win over the Jaguars as 6.5-point favorites was far more dominant than the Titans’ 42-16 win over Bills as 3-point underdogs. South Point is one of the only shops in the world offering a flat 3.5, so get it while it lasts.

Dallas Cowboys +2 vs. Arizona Cardinals Betting the Cowboys is going to be the death of my bankroll, but alas, here we go again. This number has moved 6 points from last week, too much considering Andy Dalton is not that big of a downgrade from Dak Prescott and Dallas’ defense is due *some* positive regression as its underlying numbers aren’t as bad as its points allowed.

Chicago Bears +1.5 at Carolina Panthers Chicago is better, healthier and getting three extra days to prepare off of Thursday Night Football. Carolina’s three-game win streak has been impressive, but it was considered one of the most talent-deficient teams coming into the season for a reason.

Washington Football Team +3 at New York Giants Reports indicate Kyle Allen will be ready to return, and that gives Washington considerably more upside than New York.The Football Team’s defense is already the only above-average unit in this game.

Baltimore Ravens -7.5 at Philadelphia Eagles The Eagles remain one of the most beaten-up teams in the league, leaving them hard to back until they get healthier. The Ravens, meanwhile, are back up and humming with a net 1.5 yard per play advantage combined against their last two opponents.

New England Patriots -9.5 vs. Denver Broncos The postponement of this game could benefit the Broncos as more time allows them to get healthier on defense, but that’s no certainty. And considering the line has shifted 1.5 points across the key number of 10, it needs to be certain.

Kansas City Chiefs -3.5 at Buffalo Bills Getting the Chiefs with an extra day to prepare, and even of course, coming off a loss, should have pushed this spread an extra half-point. Despite the defensive meltdown in a 40-32 loss to the Raiders as 10.5-point favorites, there’s not a better team in the NFL than the Chiefs.

Jacksonville Jaguars +3.5 vs. Detroit Lions These teams look like mirror images of each other in a lot of ways with somewhat functioning offenses to go with failing defenses. There’s no reason the line should be higher than 3, where it will surely eventually settle, so take the half-point while available.

New York Jets +9.5 at Miami Dolphins Never pay a premium borne out of a team coming off of a blowout victory, like Miami’s 42-16 stomping of San Francisco as 8-point underdogs, but especially not on the Dolphins. Quarterback Ryan Fitzpatrick’s style lends itself to a lot of variance, enough variance to even allow the Jets to have a chance at their first victory of the year.

Atlanta Falcons +3.5 at Minnesota Vikings The number is right, but I have an aversion to laying 3.5 points unless it’s unavoidable. Atlanta could get a boost this week from interim coach Raheem Morris taking over and a number of injured players potentially returning.

College football by the odds: Vegas picks and preview of every Week 7 game