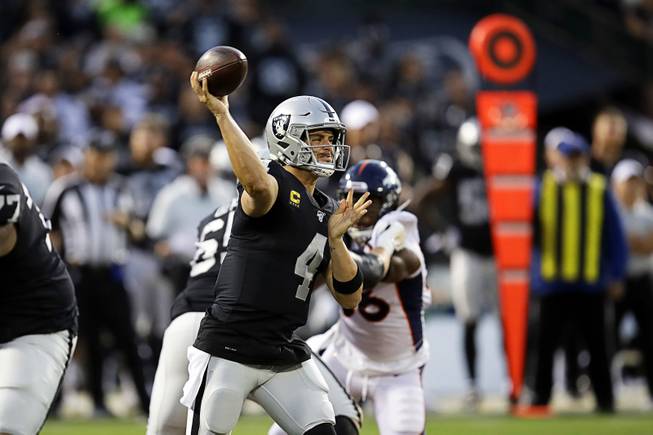 Oakland Raiders quarterback Derek Carr throws during the first half of an NFL football game against the Denver Broncos Monday, Sept. 9, 2019, in Oakland, Calif.

Las Vegas coach Jon Gruden called it “a special week.” Quarterback Derek Carr said memories — both good and bad — flood into his mind anytime he’s preparing to play the Broncos. The Raiders somewhat downplayed rivalries with the Chiefs, Chargers and even the Patriots earlier this year, but they’re openly anticipating meeting the Broncos for the first of two meetings this season. Maybe it’s because they’re looking forward to a home game after two straight weeks on the road. Or, for the more cynically minded, maybe it’s because the Raiders are the biggest favorite they’ve been all season. Whatever the reason, it appears to be a consensus across every player who’s spoken to the media throughout the week: They’re excited to share a storied series against the Broncos with Las Vegas for the first time.

There’s some explaining to do with this one considering the Raiders have been among the worst teams in the league against the pass all season, which pretty much precludes their defensive backfield from ever being a favorable matchup. To add to the concern this week, they’re beaten up with top cornerback Trayvon Mullen (hamstring) and safety Johnathan Abram (groin) trending towards gametime decisions with injuries. Cornerback Damon Arnette could also be limited in his return from thumb surgery. But if there ever was a game where these issues were manageable, it’s against the Broncos and their struggling second-year quarterback. Lock sits second-to-last in the NFL among qualified quarterbacks in QBR, ahead of only Washington’s long-ago benched Dwayne Haskins. He has six touchdowns to six interceptions and has piled up the majority of his yardage totals against soft coverages in garbage time. Las Vegas has faced a murderer’s row of quarterbacks so far but should be getting a break against Denver.

• “(Denver) is a great organization. The AFC West is a big reason I wanted to come back and coach. It’s been a division that’s been in its entirety for a long time. These are great rivalries.” -Gruden on how games like Raiders vs. Broncos drew him back to the sidelines

• “I didn’t really get the carries I thought I should have had in Denver.” -Running back Devontae Booker on his decreased workload in each of the last three seasons as a member of the Broncos

• “We want to make that place special, where people are like, ‘Man, we’ve got to play the Raiders,’ and there’s a feeling in their stomach like, ‘Dang.’ That’s not going to happen unless we earn that.” -Carr on going 1-2 in the first three games at Allegiant Stadium

• “How does Damon look? Damon, if you haven’t seen him yet, has red hair. I talked to him and he has bright red hair and silver teeth now, so he looks like a living Ohio State Buckeye.” -Gruden on the return of cornerback Damon Arnette

Some expected Denver’s edge-rushing success to decline when former Super Bowl MVP Von Miller went down with an ankle injury in the preseason. That hasn’t been the case. The Broncos sit sixth in the NFL in adjusted sack rate with former top-five draft pick Bradley Chubb leading the way and former UNR linebacker Malik Reed helping fill the void left byMiller’s absence. The two alone have combined for 10.5 sacks and 23 quarterback hits. And now they have a plus matchup against a makeshift Las Vegas offensive line still reeling from numerous injuries. The Raiders could be out three tackles against the Broncos with Trent Brown still on the COVID-19 list, Kolton Miller having not practiced with an ankle injury and Sam Young hobbled with knee and ankle injuries. Las Vegas’ planned starting offensive line coming into the season has played all of three snaps together, and that doesn’t appear to be increasing any time soon.

The Raiders’ once-maligned fourth overall draft pick has broken out over the past month. Having already established himself as Las Vegas’ best run stuffer over the first quarter of the season, the former Clemson star has suddenly amped up his ability to get to the quarterback. He registered a career-high four quarterback hits on Chargers quarterback Justin Herbert last week. Although Ferrell is still looking for his first sack of the season, it’s going to come if he keeps at a pace that has already seen him match last year’s total of eight pressures. It may come this week considering Denver might be down to its third right tackle with Demar Dotson nursing hand and groin injuries. Hurries might be just as useful as sacks against Denver anyway given Lock’s troubling tendency to fling ill-advised passes amid collapsing pockets.

The number of interceptions Carr has thrown this year with a clean pocket, making him one of only two passers in the league with at least four starts that’s still flawless in the category according to Pro Football Focus. The other is reigning Super Bowl MVP Patrick Mahomes. Not only have both of Carr’s interceptions come when he’s under pressure, but so have the majority of his five fumbles. The statistic is another testament to how important it is for the Raiders to keep Carr comfortable. When given time, he’s completely avoiding mistakes and slicing opposing defenses to shreds. He’s enjoyed particular success lately against Denver, completing 75% of his passes in his past five games against the Broncos. In that stretch, he has thrown five touchdown passes and zero interceptions as the Raiders have gone 3-2, with both losses by one point.

Now is the time to buy low on Ruggs, who has totaled only four catches for 43 yards over the last three games combined. Las Vegas is determined to get the first-round draft pick going, making it likely that Gruden scripts some early plays designed to hit Ruggs deep and/or give him space to work in open field. The Raiders ultimately want Ruggs to emerge as their go-to receiver, but for now, he’s almost exclusively a big-play threat, which makes this number seem low. Out of his 10 catches on the year, four of them have gone for more than 17.5 yards. He was one foot away from going 5-for-11 last week when he barely couldn’t stay in bounds on a fourth-quarter bomb down the sideline from Carr.

At midway point, disappointing UNLV has no choice but to look forward