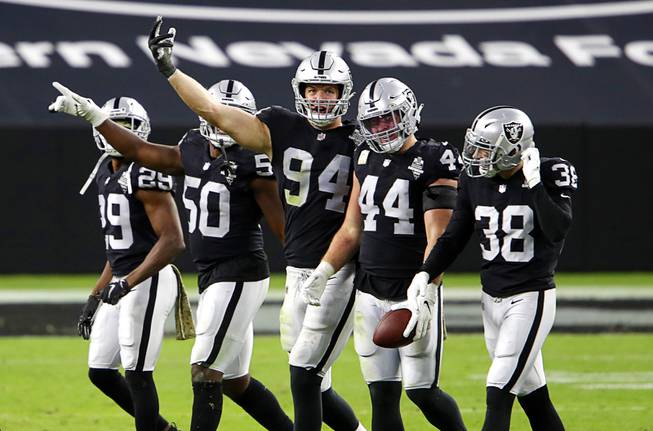 The Raiders scouted the Broncos’ offense so thoroughly that even their own offensive players seemed to know what was coming in Sunday’s game at Allegiant Stadium.

As Las Vegas running back Josh Jacobs watched Denver drive down to the 5-yard line during a 2-minute drill to threaten to capture a halftime lead, he made a prediction. With 12 seconds left in the half, Jacobs turned to backup Devontae Booker on the sidelines and told him the Raiders were going to come up with an interception the next play.

“They kept doing under routes, crossing routes and I knew that it was just matter of time before we stepped up and picked one,” Jacobs said.

Sure enough, Denver quarterback Drew Lock dropped back and tried to force a pass to top receiver Jerry Jeudy in the middle of the end zone. But Jeff Heath was as aware as Jacobs and stepped up to snag his second interception.

Instead of potentially entering the second half trailing, the Raiders regrouped and scored the game’s next 20 points to pull away for an easy 37-12 victory over the rival Broncos.

“(Heath’s interception) was huge,” Jacobs said. “It definitely took the life out of them. I feel like that gave us back the momentum because they were kind of running away with it there for a second.”

The Raiders quite literally ran away from the Broncos in the game’s final 30 minutes. One of the NFL’s best passing offenses all season transformed into a run-first wrecking crew.

With Denver dropping players back in coverage to limit quarterback Derek Carr — who had his least prolific game of the year with 154 yards on 16-for-25 passing — Las Vegas went to Jacobs and Booker repeatedly. The two backs combined to make 37 carries for 193 yards and two touchdowns apiece, elongating drives that the defense often started by tallying a season-high five takeaways.

“That’s the formula that our team had — able to run the ball, control the clock, force turnovers on defense, get a lead,” Heath said. “That’s a successful formula for us.”

It was new formula but ultimately a welcome one that improved the Raiders to 6-3 on the season including a three-game sweep in their first go-around of games against AFC West divisional opponents. And it was evident from the start against the Broncos.

Las Vegas scored on its first drive when Jacobs went untouched for an 11-yard touchdown run to put his team up 7-0. Later in the first quarter, Heath came up with the Raiders’ first interception when Lock overthrew his intended receiver on a third-down play.

“Jeff Heath made some big plays,” Raiders coach Jon Gruden said. “He’s not playing 100 percent but he’s getting close to it. I think he got the fire started.”

Jacobs made sure it kept sizzling, also setting up the Raiders’ next points with more than half of the 81 total yards they gained on a six-minute drive near the end of the second quarter. Included was his longest run of the year, a 24-yard eruption that got the Raiders to the goal line before they had to settle for a 24-yard field goal from Daniel Carlson, his first of three successful attempts on the day.

“We just pounded it down their throat,” Booker said.

Jacobs had his second 100-yard rushing game of the season, going for 112 yards on 21 carries, and scored for the second time on a five-yard run off the edge in the third quarter. Two plays later, defensive end Carl Nassib fooled Lock by dropping into coverage and getting interception at the 29-yard line.

That’s about when Jacobs started to rest and allowed Booker to start tearing up his former team. Although Booker said revenge wasn’t on his mind despite Denver decreasing his workload in each of the last three seasons, he ran like he had something to prove.

He flattened former teammates at the line of scrimmage and proved difficult to take down in open field even when the Broncos knew the Raiders were just trying to run the clock out.

“It feels great when they’re calling out your runs and stuff late in the game, when they know it’s going to be run…you get a thrill when you keep pounding it at them and get positive yards,” Booker said. “It’s definitely satisfying.”

Booker’s first touchdown, a 7-yard dive, happened right after cornerback Nevin Lawson forced and recovered a fumble deep in Denver territory. He may not have cared about facing his former team, but his teammates did.

They told him all week they wanted to get the victory for him, and Jacobs was among Booker’s biggest cheerleaders on the sidelines when he scored the game’s final points on a 23-yard run on the first play after the two-minute warning.

“He didn’t have any ill will towards Denver at all,” Gruden said of Booker. “A lot of times, players just aren’t in the right situation at the right time….but it’s good to see him have success especially against his old team.”

Denver got in the end zone for a garbage-time touchdown after Booker’s first score made it 30-6 and appeared to be on its way again in the final minute of the game. Nick Kwiatkoski put an end to the drive, however, when he made a leaping, one-handed interception with 18 seconds to go.

No word on if Jacobs called the game-ending interception, but by then, he probably should have been able to. The formula had been established.