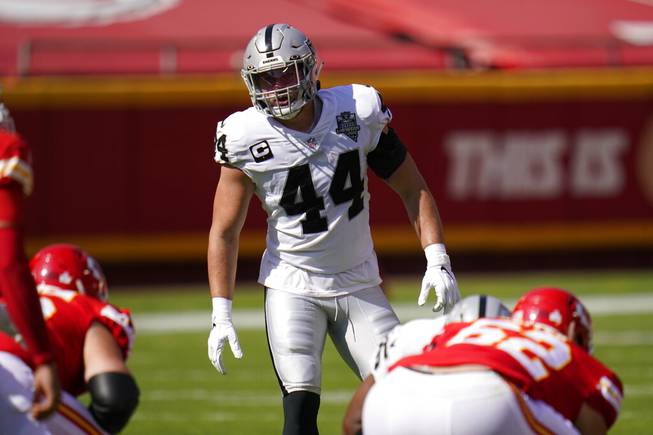 Las Vegas Raiders inside linebacker Nick Kwiatkoski (44) plays against the Kansas City Chiefs during the first half of an NFL football game, Sunday, Oct. 11, 2020, in Kansas City.

The Raiders’ 37-12 victory against the Denver Broncos on November 15 started with middle linebacker Nick Kwiatkoski stuffing a run play near the line of scrimmage. It ended with Kwiatkoski leaping and pulling down an interception with one hand.

In between, most of the big plays in arguably the Raiders’ best defensive game since Jon Gruden returned as coach three seasons ago also had Kwiatkoski involved in some capacity.

“His leadership, his playmaking, his intensity—those are things we feed off of,” Gruden has said.

Las Vegas’ defense still rates in the bottom third of the NFL and has a long way to go, but after years of struggles, the unit might finally be headed in the right direction. That’s largely because the Raiders appear to have uncovered and crafted a captain out of the 27-year-old Kwiatkoski.

In an era when franchises are hesitant to dole out big contracts to defenders who aren’t either edge rushers or lockdown coverage players, the Raiders went against the grain this past offseason, signing two high-priced linebackers in free agency. Las Vegas committed more than $56 million over the next three seasons to Kwiatkoski and Cory Littleton.

It has turned out exactly the opposite. Littleton, who missed the Broncos game after being added to the COVID-19 list, has yet to fully adjust to his new team, while Kwiatkoski has thrived.

Kwiatkoski, a fourth-round pick out of West Virginia in 2016, longed to be an every-down player but never got the opportunity behind one of the NFL’s deepest linebacker corps in Chicago, except when injury thrust him into action. That happened at the end of last season, when his close friend Danny Trevathan went down.

Kwiatkoski took over with a two-month stretch of play that had both scouts and advanced statistics bullish about his long-term potential. He’s been determined to prove that forecasting correct since signing with Las Vegas, despite unprecedented hurdles faced by free agents going to new teams during the 2020 offseason.

Due to the pandemic, players weren’t allowed at team facilities until the start of training camp in late July, leaving those like Kwiatkoski and Littleton to learn new schemes virtually, without hands-on training. The coaching staff has referenced that learning curve as part of the reason why Littleton has gotten off to a slow start, but Kwiatkoski hasn’t needed any excuses.

Zoom calls weren’t an ideal basis for his transition, but Kwiatkoski made the most out of them. “It was just communicating, taking the things we learned from the offseason Zooms and just applying them on the field as soon as possible,” Kwiatkoski said. “It’s definitely a process that’s still growing for everyone, but I feel like we’ve come a long way.”

In-person communication might actually be more difficult for Kwiatkoski. He’s naturally quiet, but the Raiders challenged him to become more of a vocal leader from the moment he stepped into their Henderson headquarters over the summer.

“I’ve never been a rah-rah guy,” Kwiatkoski said, “but it’s definitely something you need from a Mike [middle] linebacker.”

Kwiatkoski is the quarterback of the defense, the Raiders’ designated “green dot” player who can communicate with the coaching staff via in-helmet digital radio while on the field. That means it’s ultimately up to him to get teammates into the right pre-snap positions and pass along any adjustments. Timidity cannot be tolerated.

By his own admission, Kwiatkoski still has room to improve in that regard, but he says he’s getting more comfortable and eliciting feedback from teammates. Gruden and Guenther push him in practice to take more ownership of the overall unit.

They couldn’t ask for much more as far as his own play on the field. It’s been even better than advertised. “The more reps I get, the more comfortable I feel,” Kwiatkoski said. “It’s still a long way to go but I just continue to build on that.”