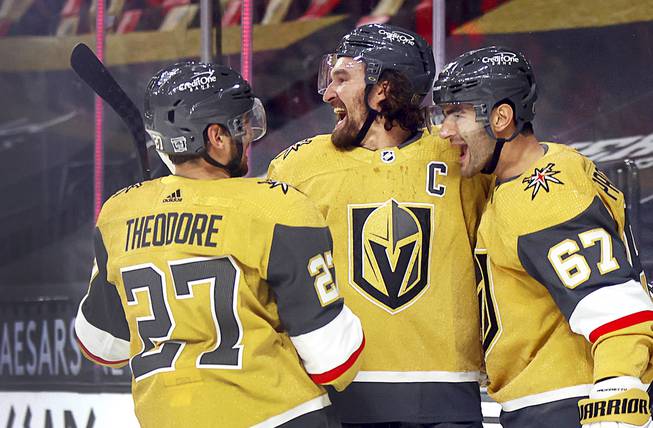 The “seven seconds or less” offense was a introduced in the mid-200os by the NBA’s Phoenix Suns, who raced the ball up the court with the likes of Amar’e Stoudemire and Steve Nash attempting to score in under seven seconds.

The Golden Knights were happy to implement the strategy into hockey on Saturday.

Max Pacioretty scored seven seconds into overtime against the Anaheim Ducks, turning what was looking like a disappointing loss into a thrilling 2-1 victory and an early-season sweep at T-Mobile Arena.

“There was a great sense of belief on the bench, the fact that we thought we were playing a strong game,” Pacioretty said. “The plan in that scenario was to strike quickly. It wasn’t exactly how we drew it up, but I won’t give away our ‘The Annexation of Puerto Rico’ there.”

The Golden Knights had just five shots on goal in the third period when they lifted goalie Marc-Andre Fleury for an extra attacker with about two minutes to play.

William Karlsson scored with 1:22 left in regulation to even the game at 1-1 and ensure Vegas got at least one point in the standings in a game they clearly controlled early. Despite not scoring, Vegas had 15 first-period shots on goal.

The last attempt on goal was the game winner.

The Ducks fumbled the faceoff to start the extra period, Mark Stone took it away and barreled into the offensive zone with Pacioretty on his right. An easy feed, a one-timer and seven seconds later, and the Golden Knights had the victory in hand.

“Three-on-three is so important in controlling the puck and trying to create and hopefully they make a mistake,” Stone said. “Fortunately for us they made a mistake one second into overtime.”

Golden Knights coach Pete DeBoer said with the shortened training camp and lack of preseason they had not practiced 3-on-3 at all coming into the game. It was also impressive they won it off a faceoff play, considering both Pacioretty and Stone are wingers and don’t typically take faceoffs.

Vegas was fortunate to get to overtime thanks to Karlsson’s goal, and fortunate to be in the position of only needing that goal to tie the game. That’s thanks to Fleury, who was on his game from onset and only got better as the Ducks started to pour on the chances. He was hardly at fault for the first goal — an Anaheim 3-on-1 after a mishap at the other end — in finishing with 21 saves.

For stretches from the second period onward he was Vegas’ best player, and his exclusion from the in-arena announcement of the three stars of the game was baffling.

“When (Fleury) makes a save and saves us guys on the back end, we want to do the work up front for him and take care of business up there like he’s taking care of business back there,” defenseman Zach Whitecloud said.

It was a big win for the Golden Knights, in that they were able to fight through a night where the offense wasn’t there for 58 minutes and still come out with a win. Not every game is going to be as pretty as scoring twice in the first four minutes and three times in the third like they did on Thursday in the season opener.

The oddities of this year schedule like played at least a small factor in tonight’s performance. Vegas players and coaches have stressed all training camp that it’s going to be hard to sweep teams in the mini two-game series the schedule drew up for the league. If a team loses the first game, it’s likely to come out hot the next one.

That’s almost how this one turned out. The Ducks were 82 seconds from a regulation and tying the Golden Knights in the still-too-early standings in the West Division. Instead, the Golden Knights won in overtime and extended its lead to three points. They improved to 11-2 all-time against Anaheim.

“I thought there was real good composure about sticking with it,” DeBoer said. “If it took us overtime tonight, it was going to take us overtime.

“It’s going to be really hard for somebody to beat a team twice in a row in this type of format. So, we’ll take these however they look.”

Nick Blake steps up in UNLV win over New Mexico