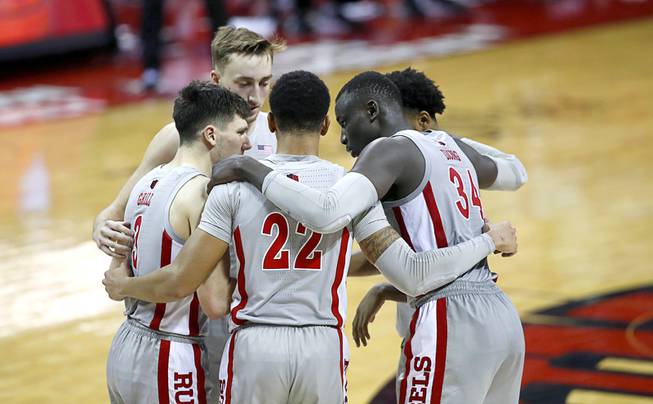 UNLV Rebels huddle during a game against the New Mexico Lobos at the Thomas & Mack Center Saturday, Jan. 16, 2021.

The shots finally started falling in the closing minutes of the first half, and at the break UNLV has pulled within 28-27 of New Mexico.

UNLV began the game by shooting an unthinkable 3-of-18 from the field, but never trailed by more than 10 points due to New Mexico’s own offensive ineptitude. David Jenkins and Nick Blake began making shots to power a 19-2 run by UNLV, and Jenkins canned a 3 to give the scarlet and gray their first lead, 22-21. A minute later Blake buried a triple to make it it 25-23 in favor of UNLV, and it looked like they’d head into the locker room with a lead until UNM’s Emmanuel Kuac hit a difficult 3 at the buzzer to give the Lobos a 1-point lead.

The overall numbers are very much a mess. As a team UNLV shot 9-of-27 in the first half, including 4-of-12 inside the paint. The team’s leading scorer on the season, Bryce Hamilton, has just two points on 1-of-5 shooting.

The good news for UNLV is that New Mexico hasn’t been any better on offense. If UNLV can just make shots at a normal rate — or anything close to normal — over the final 20 minutes, they should be able to pull away. But that’s a tall task with the way they’re playing tonight.

UNLV’s offensive woes have gone from bad to worse, and with 7:57 left in the first half New Mexico has a 17-11 lead.

The deficit should be much greater, but UNLV has played solid defense and UNM has cooperated by missing some makeable shots. But UNLV does not deserve to be trailing by only six, as T.J. Otzelberger’s team is just 3-of-18 from the field with four turnovers.

If it wasn’t for a pair of Moses Wood 3-pointers, this would be a ludicrous offensive performance. After scoring a career-high 20 points two days ago, Mbacke Diong is scoreless, as is Bryce Hamilton.

This inability to put the ball through the hoop can’t last all night, so the question now is how long the UNLV defense can keep them in it.

UNLV did not get off to the same kind of quick start that we saw in Saturday’s blowout win over New Mexico. Edoardo Del Cadia missed the first four shots of the game — all from inside the restricted area — and UNM has jumped out to an early 7-3 lead.

UNLV missed its first nine shots from the field before Moses Wood subbed in and knocked down a corner 3.

Nick Blake has also checked in for UNLV. Let’s see if the freshman wing can provide a spark, coming off his 18-point performance against the Lobos on Saturday.

UNLV will look to extend its modest winning streak to three games today, when they host New Mexico at the Thomas & Mack Center (6:30 p.m., FOX Sports 1) just two days after dispatching the Lobos, 77-54.

A look at what UNLV will have to do in order to complete the season sweep of UNM:

UNLV played its best defensive game of the season on Saturday. A lot of that was circumstantial; New Mexico is a wounded opponent, operating with a thin roster, no home base and little practice time. But UNLV attacked those weaknesses, harassed UNM into 14 turnovers, held them to 33.3 percent shooting and took care of business.

Can T.J. Otzelberger’s team replicate that performance today? UNLV isn’t a collection of players who are naturally talented on the defensive end, so they’ll have to win with effort, intensity and intelligence on that end of the floor. Doing it once is a good step in the right direction; doing it twice, in consecuitive games against the same opponent, would be a great sign.

The most exciting storyline to come out of UNLV’s first Mountain West win of the year was the play of Nick Blake. The 6-foot-6 freshman scored 18 points in 24 minutes off the bench and looked like an intriguing option to fill in for point guard Marvin Coleman, who will miss the remainder of the season due to injury.

Blake served as the primary ball-handler during his time on the court, and though he’s not a natural point guard, the offense ran well enough for Blake to register as a plus-10 in his 24 minutes. He shot the ball well (4-of-7 from 3-point range), drove to the rim for a couple layups and only committed two turnovers.

If Blake can put forth another positive performance today, Otzelberger will have to consider making Blake the primary point guard sooner rather than later.

What has gotten into Mbacke Diong? In his first three years at UNLV, the 6-foot-11 center showed minimal offensive skill. But lately he’s been putting the ball in the basket at will, and he was especially aggressive two days ago in scoring a career-high 20 points against New Mexico.

In the four games since UNLV resumed play, Diong has scored in double figures three times and is averaging 14.5 points on 73.0 percent shooting. That’s not going to last forever, but as long as Diong is scoring hot UNLV should look for him early today and see if he can exploit the soft interior of the Lobos defense once again.