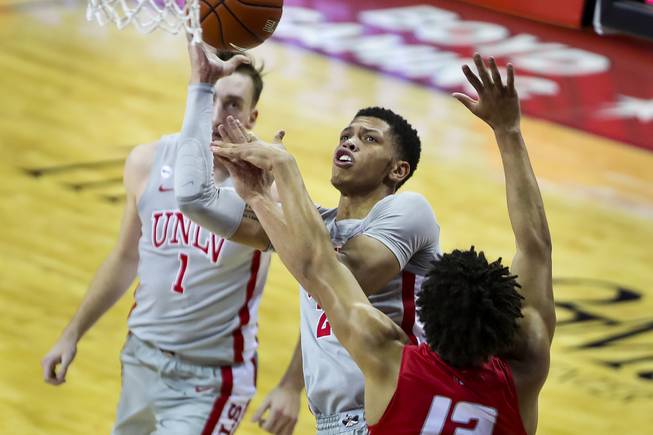 Nick Blake, Moses Wood making an impact off the bench for UNLV

UNLV Rebels guard Nicquel Blake (22) looks to shoot the ball during a game against the New Mexico Lobos at the Thomas & Mack Center, Monday, Jan. 18, 2021.

UNLV is still working to figure out its ideal rotation, and Thursday’s not-technically-an-exhibition matchup against Benedictine Mesa will be another chance for emerging players to solidify their roles.

And with star swingman Bryce Hamilton questionable to play due to an ankle injury, it could open up even more court time for the players who are still working to earn T.J. Otzelberger’s trust.

Two players who are already on their way to securing the coach’s approval are freshman wing Nick Blake and sophomore forward Moses Wood. They have been the first two players off the bench as of late, now accustomed to checking in at the same time around the first media timeout, and the results are starting to trend in the right direction.

In the four Mountain West games UNLV has played so far, Wood and Blake have posted positive plus/minus ratings, and their net ratings are the best on the team among those who have gotten significant minutes.

Blake’s breakout has been obvious. He has played 21.8 minutes in MWC games and scored 10.5 points, including an 18-point performance in the first game against New Mexico last week. As the team’s top recruit in the 2020 class, Blake is living up to expectations; Wood’s play has been more of a surprise, and a pleasant one at that.

Wood, a 6-foot-8 sharpshooter, is only averaging 3.0 points in 18.3 minutes against conference opponents, but his propensity for moving the ball and stretching the floor has helped UNLV play efficient offense when he’s on the floor. Wood’s offensive rating of 102.8 is the best on the team since they resumed play.

UNLV has also gotten encouraging performances from true freshmen Reece Brown and Devin Tillis. The forwards have played limited minutes, so there is a small sample size at work, but in their first taste of Mountain West action they’ve posted the two best net ratings on the team (Tillis +29.8 and Brown +27.3).

In Monday’s tight win over New Mexico, Otzelberger left Tillis on the floor down the stretch as part of the closing lineup, showing the utmost confidence in the 6-foot-6 California native.

“Devin Tillis was so big for us,” Otzelberger said. “Defensively we really trusted him out there. He’s a great communicator and he hasn’t been in a game like that yet in that capacity, but I thought he really handled it well late for us.”

For a UNLV team that is largely made up of freshmen and inexperienced newcomers, Otzelberger is counting on some of those players to distinguish themselves as known quantities. With 12 conference games left on the schedule, it looks like that process is now underway.