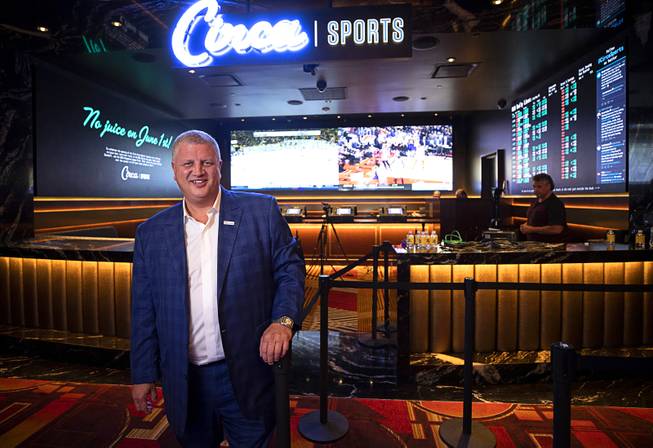 Circa Sports launches with promise to foster a competitive betting experience

Casino owner Derek Stevens poses in front of the first Circa sports book at the Golden Gate in downtown Las Vegas Friday, May 31, 2019. The sports book opens Saturday, June 1.

Many of the sharpest sports bettors in town began wiring thousands, if not tens of thousands, of dollars to the Golden Gate Casino cage in preparation of the property’s new sports book opening today. Circa Sports will make its anticipated debut with a highly lucrative one-day promotion, taking no juice on sides in Major League Baseball, the Stanley Cup Final Game 3 and the UEFA Champions League Final.

“Everyone is ready to take some shots,” Golden Gate owner Derek Stevens said without a hint of trepidation in his voice while sitting in the middle of his new sports book.

His hope is that the opening of the new shop will put bettors in the habit of placing wagers with Circa Sports before the grand opening of the adjacent Circa Las Vegas resort late next year. Stevens has unveiled plans for the largest sports book, and largest television screen, in the world as a centerpiece of the currently under-construction property.

The new space at the Golden Gate is more modest but gives a taste of the experience. There are plush new counters, marble floors, betting kiosks and a twitter feed pulling in the latest sports news as part of the digital betting board. A Circa Sports betting app will also launch concurrently today.

But Stevens, an unabashed sports bettor himself, knows educated customers now want more than modern bells, whistles and conveniences to patronize a sports book. He says part of Circa Sports’ focus will be to create a relationship with its gamblers, helping first-time bettors through the myriad of options while welcoming those who apply more sophistication to their wagers.

That’s an increasingly rare attitude in Las Vegas, but the similar to the approach of the Westgate Las Vegas Superbook. And it’s a former Superbook bookmaker, Matthew Metcalf, whom Stevens has put in charge of his operations as sports book director.

“Allowing Matthew to develop a team here and at The D allows him a year-and-a-half to get ready for when Circa Las Vegas opens,” Stevens said. “We’re going to be focusing on being friendly and having fun, but at the same time, he’s going to be posting some tight numbers.”

One of Metcalf’s first tasks was collaborating with Stevens to come up with a football betting contest. Entries will be accepted starting tomorrow for the Circa Sports Million, which has a $1,000 entry fee and asks participants to pick five NFL games against the spread per week.

Circa Sports is taking no rake in the contest while guaranteeing a $1.5 million prize pool, $1 million first-place prize and $50,000 quarterly awards for the best record. That means the contest will need to draw 1,500 players to not be a losing proposition for the house. It’s ambitious considering it took the Superbook’s similarly structured Supercontest more than two decades to draw that many entrants.

“I’m not worried about it all,” Stevens said. “If there’s an overlay, it’s the greatest marketing ever.”

In addition to the contest, Circa Sports will focus heavily on drawing action in the futures market.

“We just think futures betting provides a lot of value to customers and we’re going to be very aggressive,” he said. “With all the tourists coming up and down here, we’re going to allow them to parlay cross-sports on futures. So, if you’re someone visiting from Chicago, you might want to bet the Cubs to win the World Series and the Bears to win the Super Bowl. We’re going to have that. That’s going to be one of the key elements of the whole thing.”

Futures are typically an area where casinos take advantage of the betting public with extremely high hold percentages calculated into the odds. Stevens promises that won’t be the case at Circa Sports, and that their offerings will be as fair as any shop in town.

“We will be very, very competitive,” he said.

Strategies can always change, but so far, Circa Sports has shown to no reason to be dubious of any of Stevens’ claims. The opening-day no juice promotion, for instance, is more than a limited marketing ploy.

“That’s part of the reason why we went with this promotion,” Stevens said. “No juice really goes to the point of us looking forward to having the professional bettors coming in here.”

From functional to fancy, NFL stadiums have made a huge leap