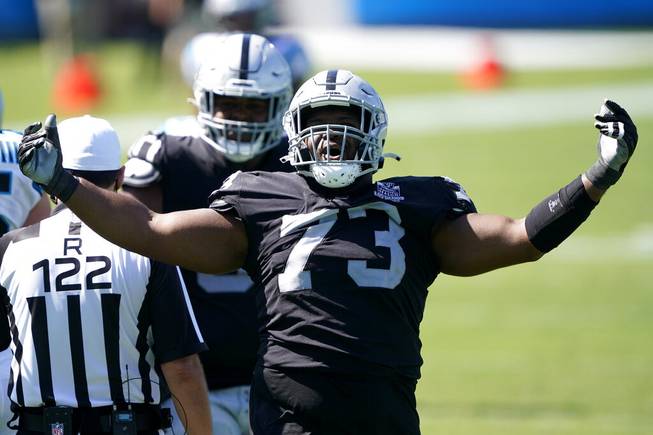 Jon Gruden was not happy with what he saw from the Raiders’ defense in Sunday’s 45-20 loss to Tampa Bay. It was such a poor performance that Gruden went as far as to promise changes during his meeting with the media on Monday.

“We’re going to make some changes in the lineup, possibly, and in the scheme that we use,” Gruden said, “and hopefully we’re going to change the results we’ve been getting.”

The problems on defense are obvious, but the solutions are not. But as Las Vegas gets set for a road test at Cleveland this week, here are three moves that could be worth trying:

It takes gumption to admit your mistakes, and it might be time for the Raiders to swallow their pride and do that with defensive tackle Maliek Collins.

Collins was signed in the offseason on a modest 1-year, $6.5-million contract, and the coaching staff spent training camp taking up his ability to put pressure on opposing quarterbacks. And based on his advanced metrics from 2019, it looked like a good gamble by the Las Vegas front office.

Nearly halfway through the season now, it’s pretty clear that Collins is not producing the way the coaches expected. He has yet to record a sack, and opposing teams have no qualms about leaving him single-blocked. On this crucial fourth-down play against Tampa Bay, Collins had a chance to get some inside pressure on Tom Brady, but instead he got completely blocked out of the play:

Not only did Collins not get any pressure, he got pushed out of his lane, allowing Brady a clear passing window to connect with Chris Godwin on time. After picking up that first down, Brady went on to throw a back-breaking 33-yard touchdown with seconds remaining in the half.

The Raiders should seriously consider benching Collins in passing situations and giving all his pass-rush snaps to Maurice Hurst. Not only are Hurst’s pressure stats better, but he shows out way more on the game tape, too.

On this third-down play, Hurst rushed from the outside and put pressure on Brady — perhaps the only true pressure Las Vegas recorded on the day — and forced a low-percentage attempt that fell incomplete and ended the drive:

The Raiders are struggling to generate a pass rush. It will hurt to admit that Collins isn’t working out, but it might be time to elevate Hurst.

Second-year defensive lineman Clelin Ferrell is having a nice season, but “nice” isn’t good enough. The Raiders need sacks and pressures, and Ferrell just doesn’t create enough havoc when lined up at defensive end, where he gets most of his snaps.

As we’ve noted throughout the season, Ferrell has much better matchups on the interior, and he’s a genuine threat when he’s able to rush 1-on-1 against a guard. A front four of Maxx Crosby at one end, Hurst and Ferrell inside, and Arden Key or Carl Nassib at the other end would appear to be the Raiders’ best pass-rushing lineup.

Gruden hinted that such lineup moves could be coming soon.

“We’re going to try to get the best four out there that we can,” Gruden said. “Whether that involves more blitzing, we’ll see. Who goes inside, who goes outside. Who’s on the left side, who’s on the right side. What stunts we call. What blitzes we call. Everything is on the table.”

The Raiders want to be a team that generates pressure with its front four, allowing the linebackers and defensive backs to play back in coverage. That’s what every team wants to do. But when the D-line isn’t bringing the heat, the kneejerk reaction is to artificially juice the pass rush by blitzing extra defenders.

For Las Vegas, blitzing has not worked this season.

That’s a losing ratio, and one that should make Gruden and defensive coordinator Paul Guenther reassess their blitz packages. Considering it has come from a variety of players and positions, it’s probably not a problem with the quality of the players — Abram, Collins and Joyner are capable of blitzing and getting to the quarterback.

Whether it’s an X’s and O’s issue, a timing issue or something else, the Raiders either have to be more effective at blitzing or cut down on it.