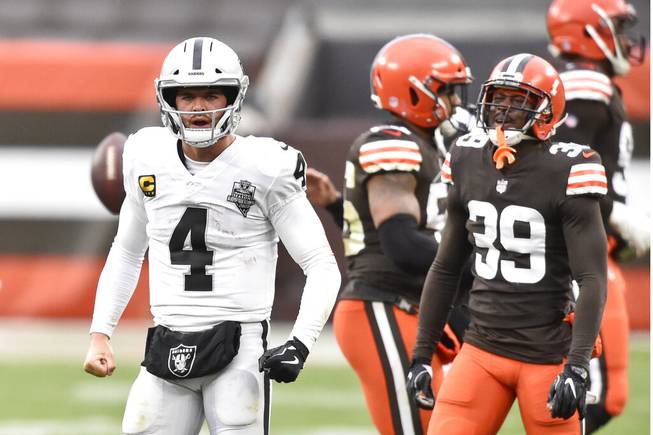 Las Vegas Raiders quarterback Derek Carr (4) reacts after rushing for a first down during the second half of an NFL football game against the Cleveland Browns, Sunday, Nov. 1, 2020, in Cleveland.

Between an offensive-line sized coat and a mask that actually appeared to stay in place, the expressions of Raiders coach Jon Gruden were a mystery Sunday at FirstEnergy Stadium in Cleveland.

The weather conditions in Cleveland made it so Las Vegas could line up and pound the ball with its run game, often in a classic power formation, and no one could say a darn thing about it being misguided or archaic. Gruden must have loved it as the Raiders were forced to rely on attributes like toughness and physicality in a throwback affair, one not unlike the games Gruden grew up loving in nearby Sandusky, Ohio.

Josh Jacobs had his first 100-yard rushing game of the season, picking up 125 yards on 30 carries. He chugged his legs to pick up multiple conversions on 3rd-and-short — the Raiders went 8-for-14 on third downs overall — and overshadow getting stuffed on three straight attempts at the goal line in the fourth quarter.

It didn’t always seem possible the Raiders could win this way. They got bad news Sunday morning when right tackle Trent Brown was a surprise scratch with illness.

Brown’s absence was reportedly unrelated to do with last week’s positive coronavirus test, which meant he took a bath of criticism on social media from Raiders’ fans. It all felt a little unfair, as even though Brown has brought questions about his motivation upon himself, his health is paramount, and he just went through a serious sickness.

Let’s wait for the facts before piling on the Raiders’ second-highest paid player.

Las Vegas was fine without him anyway — even if it didn’t look that way from the beginning.

Brown’s replacement, Sam Young, did have trouble in the first couple drives as he got beaten by both Olivier Vernon and Myles Garrett to allow a sack and a near strip-sack, respectively, on Derek Carr.

Las Vegas, continuing in a season-long problem, was less disruptive up front on defense. The Raiders only hit Baker Mayfield once all day — by practice-squadder Chris Smith, of all people.

Las Vegas held its own against the run, though, and that was more important considering the elements.

Cleveland, one of the best rushing teams in the NFL, managed only 101 yards on 22 carries.

The middle of the offensive line was a particular strength, a welcome sight with left guard Richie Incognito missing his fifth straight game and replacement Denzelle Good rebounding after a couple mediocre games.

It wasn’t all manhandling and pushing around, though. The Raiders experienced some good fortune, an always-necessary factor in a game as close as this one.

After Gruden harped on the Raiders’ -5 turnover margin next to the Browns’ +5 all week, the figures regressed Sunday. The Raiders claimed the game’s only turnover with Nick Kwiatkoski skillfully stripping Harrison Bryant and Nicholas Morrow falling on the loose ball during the Browns’ opening drive at the 27-yard line.

Cleveland didn’t get into Las Vegas’ red zone until the third quarter, and appeared to capitalize when Jarvis Landry caught a 20-yard touchdown from Mayfield. But Gruden challenged the reception, and referees overturned it when replay revealed the ball ever-so-slightly sliding on the ground.

Browns’ fans — 12,000 were allowed inside the stadium — fought through the chill for a monstrous boo a few minutes later when a similar scenario happened on the other end but a Hunter Renfrow touchdown was upheld for the Raiders.

Both were probably the right calls, but both could have gone the other way without anyone being surprised. That’s how they close they were.

So, yes, luck shouldn’t be downplayed as holding no role in the Raiders’ victory. This was no ordinary 10-point win.

It was certainly a hard-fought, well-deserved 10-point win though. That’s something everyone in Raider Nation can smile about.