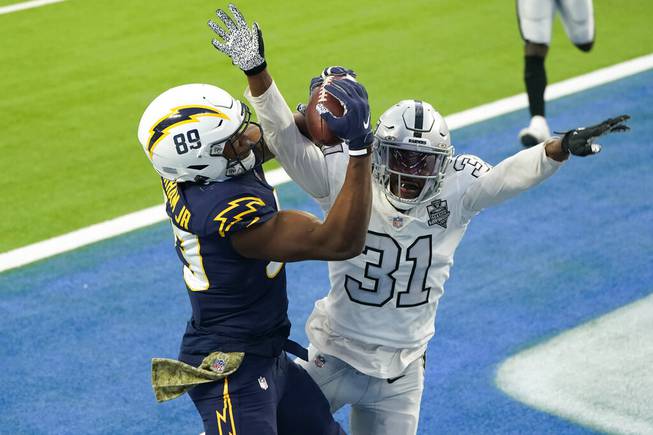 The Raiders’ reserve cornerback learned his “little brother” and college teammate, 22-year-old Ka’Darian Smith, had been shot and killed overnight in his Houston apartment. Not wanting to disrupt the final few days of preparation for a Week 9 game at the Los Angeles Chargers, Johnson compartmentalized his emotions and focused on his role as a scout-team defensive back to help Las Vegas get ready.

“I didn’t tell a whole lot of people about it,” Johnson said, “because I knew we still had to prepare and win the game and I didn’t want to be a distraction.”

Far from a distraction, the lanky 24-year-old from Bryan, Texas, became the decisive player in the Raiders’ 31-26 victory over the Chargers. A series of injuries to cornerbacks ahead of Johnson on the depth chart forced him into action, and the Chargers certainly noticed.

With the ball on 4-yard line and enough time to run two final plays to win the game, Los Angeles called for rookie quarterback Justin Herbert to target Johnson on back-to-back fade routes. Johnson broke up both attempts, first ripping the ball away from receiver Mike Williams with one hand and then desperately jostling with both to force a drop from tight end Donald Parham Jr. with no time left on the clock.

The 6-foot-2, 210-pound cornerback’s arms ended up being the only thing to prevent the Raiders from blowing a double-digit second half lead. After the Chargers took the lead for the first time by scoring twice in 20 seconds to end the second quarter, the Raiders came out of the locker room determined to flip the 17-14 halftime score.

Carr had nearly half of his 165 passing yards in the Raiders’ initial two second-half drives, throwing a 45-yard touchdown to receiver Nelson Agholor and then a 2-yard strike to tight end Darren Waller to go ahead 28-17. But Las Vegas would barely move the ball again over the final 23 minutes of play.

The Raiders’ only points came when K.J. Hill muffed a punt in Chargers’ territory late in the fourth quarter that special teams captain Kyle Wilber was able to recover. Daniel Carlson knocked through a 31-yard field goal with 4:37 to go, giving Herbert plenty of time to lead his first career game-winning touchdown drive.

With cornerback Keisean Nixon having hurt his groin to join starters Trayvon Mullen — who came out in the first quarter with a hamstring injury — and Damon Arnette — who missed his fifth straight game with a broken thumb — on the sidelines, Johnson knew the Chargers were going to be throwing at him. Coming into the game, the 2019 fourth-round pick out of the University of Houston had only played 44 snaps in two years — about 4% of the Raiders’ defensive plays.

“I had no idea I was going to have so many reps coming into the game,” Johnson said. “But I prepared the same way throughout the week.”

Herbert picked on Johnson a couple times during the 71-yard final drive, particularly on a pair of completions to top receiver Keenan Allen, but it wasn’t exclusive. All of the Raiders’ defensive backs had trouble stopping Herbert, as he completed 28 of 42 passes for 326 yards and two touchdowns on the day.

The Chargers had more yards than the Raiders, 440 to 320, and more first downs, 26 to 15, but the visitors continually came through when it mattered. That included when Williams appeared to score a game-winner with six seconds left but couldn’t maintain control of the Johnson-swatted ball as he slammed to the turf.

“I think he initially caught the ball, but I felt like fighting through the ground would make the difference and always make the difference,” Johnson said. “So I pulled it and thought, ‘OK here we go,’ but I didn’t think there would be a second left. I thought that was going to be the last play of the game.”

Johnson “absolutely knew” the same play was coming again when the Chargers lined back up and put the 6-foot-8, 237-pound Parham across from him. Parham hauled in Herbert’s pass more cleanly than Williams and the official nearest to the play signaled a touchdown.

The Chargers rushed the field as most of the Raiders slowly headed to the locker room — except Johnson. He was getting up from the site of the catch windmilling one arm and holding the other up to wave goodbye to the Chargers.

“I felt it — I pulled the ball out of his hands,” Johnson said. “I was like, ‘there’s no way.’ Honestly, in my mind, after the play I didn’t know if they’d review it or not since it was the last play of the game. I didn’t know if we could throw a challenge flag or not so when that happened, I just thought, ‘Lord please give us a chance to review the play.’”

The play was reviewed, but the Raiders didn’t need to wait for the announcement to start their own counter celebration. The $40 million LED screen stretched across the new $5 billion SoFi Stadium clearly showed Johnson’s second swipe knocking the ball out of Parham’s hands.

“He got baptized in the NFL today,” Raiders coach Jon Gruden said. “Thank goodness for Isaiah Johnson and his length.”

Gruden awarded Johnson a game ball when the Raiders reached the locker room and praised his young cornerback’s ability to rise to the occasion. It was the greatest moment of Johnson’s football career, one he’s worked towards his whole life.

But to Johnson, the preparation wasn’t the only cause of the success. It was also about having an extra motivator, an extra soul watching over him.

“I feel like that game, that play, not to make it about myself whatsoever, but I felt like that moment was for (Smith),” Johnson said. “Because I know he would be with me in a moment like that.”