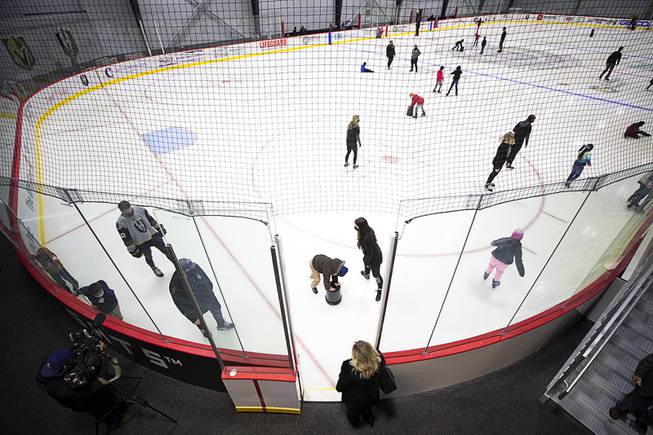 Children from Henderson’s Battle Born Kids program try out the ice rink during the opening of the Lifeguard Arena in Henderson Tuesday, Nov. 10, 2020. The arena is the practice facility for the Henderson Silver Knights.

The Henderson Silver Knights don’t have any players or a place to play games. But starting today, they have a place to practice — eventually.

“You can see what they’ve done here, and it’s magnificent,” said Manny Viveiros, coach of the American Hockey League affiliate of the Vegas Golden Knights.

The Henderson arena wasn’t part of the Golden Knights’ plan when they arrived to Las Vegas in 2017. The team wanted an AHL affiliate in the region — it’s easier to call players up and down that way — but didn’t give much thought to the Las Vegas suburb.

Following the success and excitement of the team’s first season, however, the Golden Knights began looking closer to home.

“We just saw an opportunity that was a little bit different than maybe what had been traditionally been the AHL model,” Golden Knights President Kerry Bubolz said. “It’s going to be successful. We’re really excited about it.”

Henderson Mayor Debra March said she was excited about the team and the new arena, which will also host community events.

Meeting rooms will be available for public bookings, and the rinks will have open skates, figure skating, and youth and adult hockey leagues. Early next year, an outdoor plaza is expected to open for hockey watch parties and other events.

“This is a game changer for Water Street,” March said. “Not only are we seeing a huge economic investment in the area because of this facility, but this facility will bring a lot of activity and programming to families in our community.”

The AHL has announced Feb. 5 as a tentative start date for its season.

The Silver Knights will play at the Orleans Arena near the Strip while their permanent home is under construction. The Henderson Event Center is set for a 2022 completion at the old Henderson Pavilion site near Green Valley Parkway.

Players will join the team after NHL training camp, tentatively slated to begin in December, ahead of a Jan. 1 launch of the season.

“Seven months of doing nothing, basically, and we’re getting closer and closer to the end date,” Viveiros said.