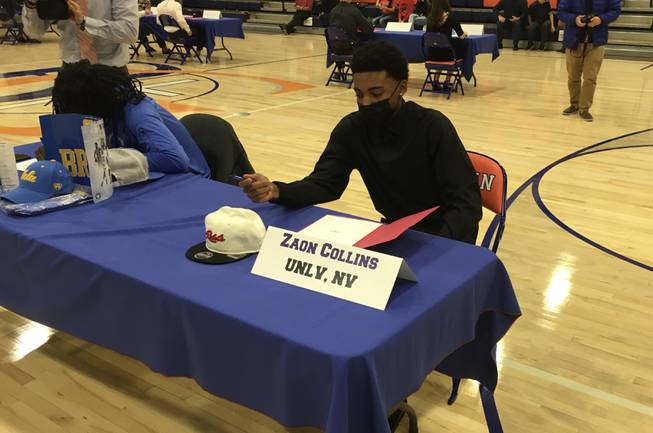 Zaon Collins makes it official by signing with UNLV

Zaon Collins doesn’t know anything other than winning.

The Bishop Gorman point guard has won a ton of games in his high school career, including three state championships (so far), and so after signing his letter of intent to UNLV on Thursday, he made his intentions clear for when he gets to the college level.

Collins will graduate from Bishop Gorman in the spring and join UNLV in the fall of 2021. He is rated as the No. 36 player in the country, according to 247Sports’ composite rankings, making him the most heralded recruit to choose the scarlet and gray since Brandon McCoy (No. 14 nationally) committed to Marvin Menzies in the Class of 2017.

By playing a starring role for the city’s most prominent prep team, Collins is already familiar to diehard local basketball fans.

Collins said he takes pride in being a hometown kid.

“It means a lot,” Collins said. “To show the Vegas community that I love Las Vegas. I’m from here, raised here.”