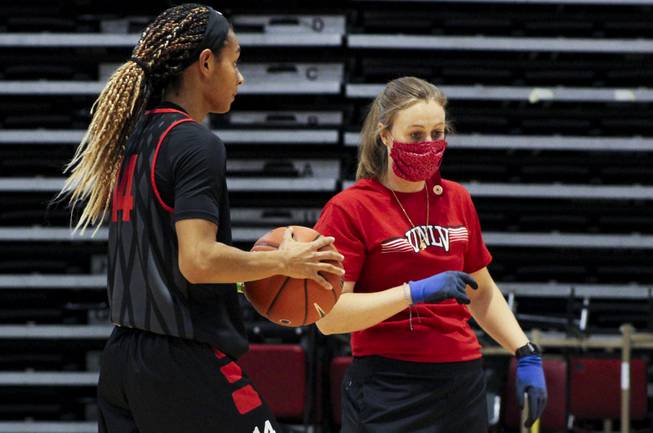 First-year UNLV basketball coach Lindy La Rocque instructs senior guard Bailey Thomas during a practice ahead of the 2020-21 season. Thomas, a product of Centennial High, is the reigning Mountain West defensive player of the year.

Lindy and Ally La Rocque got to leave school early this particular week to work as ball girls at the Mountain West basketball tournament at the Thomas & Mack Center. Dad, Al, is a local prep coaching legend and had connections to land the prime gig for his basketball-loving grade school-aged daughters.

Game after game, day after day, they had the best seat in the house for the tournament, where UNLV won the championship. Lindy became a fan of players like Mark Dickel, Kaspars Kambala and Tyrone Nesby, who led UNLV to the 2000 tournament title.

The Las Vegas natives already loved UNLV, but the excitement of the title run took the passion to another level. They couldn’t help but feel part of the moment, especially when supporters stormed the court after UNLV beat BYU in the finals.

“I thought I was going to be trampled over by the fans,” Lindy La Rocque said.

They also got to work games in the women’s tournament, which featured UNLV’s best all-time player Linda Frohlich and Colorado State’s Becky Hammon, one of the greats in the women’s game and a coaching pioneer who is a top assistant with the San Antonio Spurs.

“Linda Frohlich, I wanted to be her best friend,” Lindy La Rocque said. “That was my first time ever watching women. The light clicked for me that, A) I could play basketball in college myself, and B) they are so good.”

The UNLV women haven’t been to the NCAA Tournament since Frohlich, the program’s all-time leader scorer, led them there in 2002. Lindy La Rocque is determined to change that.

Hired last spring as the program’s new coach, La Rocque doesn’t have to be sold on the greatness of the university or city. She’s seen firsthand many of the memorable moments, or cheered from a distance over the past decade since leaving town on her basketball journey. She played collegiately at Stanford, which reached the Final Four in all four of her seasons, from 2009 to 2012.

“This is a sleeping giant. There is so much to recruit to and show,” La Rocque said of UNLV, which is scheduled to open its season Wednesday afternoon against Northern Arizona at the Thomas & Mack.

La Rocque quickly learned what she long suspected about UNLV — it’s one big, happy family. She constantly receives messages of encouragement from supporters, and that’s without being able to meet them in person because of the coronavirus pandemic. Already, she feels at home.

Senior guard Bailey Thomas, the team’s leader, is more than familiar with that feeling. Her dad, Derek Thomas, was an assistant with the UNLV men in the 1990s, and the family always considered Las Vegas home. Her younger sister, Jade Thomas, is a freshman for UNLV.

“Seeing (my dad) wear his UNLV sweats all the time, even when he wasn’t at UNLV anymore,” Bailey Thomas said. “UNLV is home. There’s that pride that even when people leave they want to come back. They are still Rebels when they leave.”

At age 30, La Rocque is the second-youngest head coach in Division I women’s basketball, according to UNLV. But she’s far from inexperienced.

In her 11 seasons as a player and coach, La Rocque has never failed to make the NCAA Tournament, including the past three seasons as an assistant at Stanford, which went 87-22 with appearances in the Sweet 16 (2018), the Elite Eight (2019) and the Final Four (2017).

Durango High School coach Al La Rocque comforts his daughter Lindy La Rocque during the coach’s last home game in March 2008. He says he “never dreamed it would be so much fun” coaching Lindy and his other daughter, Ally, born 14 months apart.

She scored 2,678 points in her career at Durango High, where she played for father, who also coached the school’s powerhouse boys team. Ally is the director of basketball administration at Kansas State.

Lindy La Rocque was seemingly a step (or two or three) ahead of her peers when it came to understanding the game, which was expected being the daughter of a successful coach. But what separated her from others was an off-the-charts competitive nature. It’s exactly how she coaches.

“She’s intense, but intense with a purpose,” Bailey Thomas said. “It’s constructive. She wants to get the best out of you.”

And the best for UNLV, La Rocque has repeatedly said, is on the horizon. Yes, there are plenty of challenges in being a first-time head coach — especially when there’s also the curveball of navigating the pandemic. The initial months on the job featured Zoom meetings with players and little time in the gym.

And, of course, UNLV is going on two decades of not being a NCAA Tournament qualifier. But La Rocque is determined to make the upcoming years memorable.

After all, she’s already been part of one court-storming party at UNLV.

“Coming from a winning program and winning championships everywhere I have been, I know what it takes,” she said. “More than anything, my style is a high expectation and a high standard of excellence on and off the court. Sometimes, to get the job done, you have to be intense.”