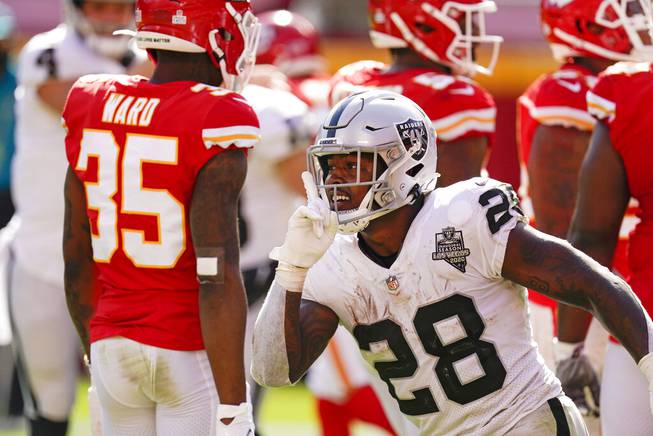 Sweep against Chiefs could put Raiders in the driver’s seat

Las Vegas Raiders running back Josh Jacobs celebrates after scoring on a 7-yard touchdown run during the second half of an NFL football game against the Kansas City Chiefs, Sunday, Oct. 11, 2020, in Kansas City.

• Who: Chiefs at Raiders

For better or for worse, the Raiders have the Chiefs’ attention. As is often the case with the defending Super Bowl champion, Kansas City has been accused of overlooking some opponents or not focusing fully in certain games coming off of winning the Lombardi Trophy. That won’t be an issue in the team’s first trip to Las Vegas. The Chiefs spent the week smarting over a perceived slight by the Raiders after the latter’s 40-32 victory in Kansas City earlier this year. The Raiders’ team buses reportedly circled the Arrowhead Stadium parking lot, which the Chiefs are considering a victory lap. Raiders coach Jon Gruden said it was an overblown misunderstanding, and the extra drive time was a not an unsportsmanlike gesture toward the Chiefs but rather an attempt to annoy a “smart-aleck bus driver.” This game may not have needed any extra juice considering it will have a major impact in determining the AFC West division champion, but the bus-route disagreement has provided it anyway.

The Raiders gouged the Broncos on the ground in last week’s 37-12 victory with more than 200 total rushing yards and an average of 5 yards per carry. As long as it can keep Kansas City from building too big of an early lead, Las Vegas should have a great chance to make it back-to-back weeks of rushing success behind running backs Josh Jacobs and Devontae Booker. For the third straight year, rush defense is Kansas City’s biggest weakness. The Chiefs are giving up 4.8 yards per carry, tied for fourth worst in the NFL. Their offense scores so prolifically that it often doesn’t matter as opponents fall into big deficits and are forced into throwing more heavily as a means of playing catch-up. It even happened to the Raiders to an extent in the first meeting this season after they went down 21-10 in the second quarter. Las Vegas made it work but, in the rematch, would prefer to shorten the game and let Jacobs and Booker keep the clock moving.

• “A lot of people care about this game like it is their Super Bowl. … That’s how they acted by doing two laps around the stadium when they won it.” — Kelce on the Raiders’ victory lap controversy while interviewed on ESPN

• “I’ve heard people say crazier things about me than driving a bus around the stadium, and you still show up and play the game. So, if they want to get excited about it, awesome.” — Quarterback Derek Carr on the controversy

• “I’m sure that’s just a coincidence.” — Gruden, feigning laughter when asked about the Chiefs getting a bye week before playing the Raiders for the fourth time in five years

• “That’s a cool little slogan but I feel like it’s a little undeserving at times because of how well our offense plays, not just me.” — Renfrow on the Raiders’ “third-and-Renfrow” catchphrase born out of his success in converting first downs

Kansas City has too many weapons to stop. Opponents must instead decide who to key in on and deny from beating them. If the Raiders’ public comments are to be believed this week, they’ve decided Kelce is the most important to slow. Based on series history, it makes sense. The ninth-year tight end has tormented the Raiders, gaining 953 yards and scoring six touchdowns in 13 career games. Most of that damage has come since Patrick Mahomes took over at quarterback. In five games against the Raiders with Mahomes, Kelce is averaging 107 receiving yards per game while catching 70 percent of his targets. The 6-foot-5, 260-pound Kelce is a matchup nightmare for most teams but was especially lethal against a weak Raiders’ linebacking corps the last couple years. Las Vegas has gotten better linebacker play this year but may have to get creative in how to cover Kelce with Cory Littleton expected to miss his second straight game after testing positive for coronavirus.

The second-year slot receiver out of Clemson is the Raiders’ highest-graded pass-catching option by Pro Football Focus. He does have some hidden advantages that help in systems like PFF’s grading, namely a relatively small workload — he’s only played 48 percent of the offensive snaps on the season — and the fact that opponents aren’t tailoring game plans to stop him specifically. But there’s no denying Renfrow is a consistent difference-maker when he’s on the field as he showed in a number of ways against the Broncos. His crisp route-running allowed him to haul in a pair of catches in tight windows. His vision and quickness resulted in two long punt returns, including one for a touchdown, even though they were both called back for penalties. One of his biggest plays of the season came in the first game against the Chiefs, when he cut through the defense for a 42-yard reception. Kansas City can’t lose track of Renfrow or else he’ll make them pay.

Kansas City’s remaining strength-of-schedule ranking, according to Football Outsiders. That becomes extremely important if the Raiders can sweep the season series with the Chiefs for the first time since 2012. Las Vegas would still be a game behind Kansas City in the AFC West standings, but it would own the tiebreaker. And, looking at the opponents of both teams over the final six weeks of the season, the tiebreaker has a stronger chance of coming into play than some may expect. Las Vegas’ strength-of-schedule rating, by contrast, is 25th as the hardest part of its slate has now passed. The Raiders were as high as a 12-to-1 underdog to win the AFC West coming into the season, but if they beat the Chiefs again, they have a realistic shot to pull it off.

The Chiefs’ problems against running backs aren’t exclusive to rushing; they also struggle to slow them in the passing game. Kansas City rates 30th in the NFL in defending running backs as receivers per Football Outsiders’ DVOA ratings. The matchup should present an opportunity for Jacobs to re-immerse himself in the passing game. The second-year running back out of Alabama spent the offseason trying to improve his receiving ability, studying tape of Raiders’ receivers and practicing his route-running. So far, he doesn’t have the results to show for it even though he started to get back on track against the Broncos with four catches for 24 yards. Jacobs should continue in the right direction against a Chiefs team that has allowed checkdown options to roam free all season.

Analysis: Will Caleb Grill be worth the wait for Otzelberger and UNLV?