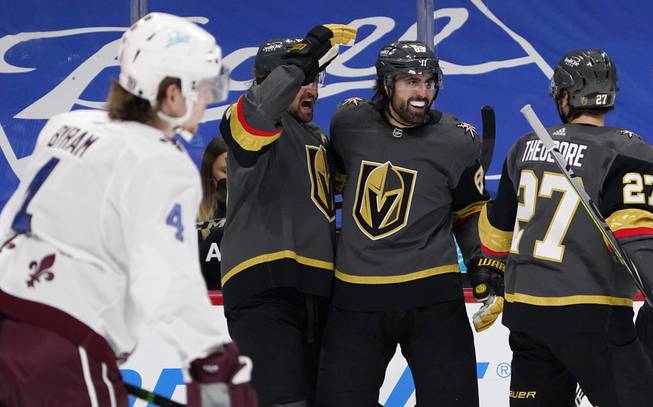 Golden Knights make statement in Colorado in win over Avalanche

The Golden Knights didn’t just beat the Avalanche on Monday. They won one of the most important regular season games of the year, and did it with an exclamation point.

Vegas struggled to score in the first three games against Colorado and failed to look like the dominant team it had been against other opponents this season. The Golden Knights scored three goals in the second period, beat the Avalanche 3-0 and reaffirmed themselves as the top team in the West Division.

“We wanted to send a message and I thought our guys did that,” coach Pete DeBoer said. “The message was to Colorado that we can play with them because I think there was some question after the first three games of the series whether we could.”

The Golden Knights’ win ended the four-game midseason set with Colorado in a split after Vegas won the first game last week, then dropped the next two, including one at Lake Tahoe on Saturday.

It was clear in the postgame press conference how much the win meant, as the Golden Knights were jubilant. Alex Tuch replied by laughing and saying it was “really tiring” playing defense against Colorado star Nathan MacKinnon, and when Jonathan Marchessault saw his own image on the screen he made a comment about the “gun show.”

When asked if he was referring to himself or Shea Theodore, who was sitting next to him, Marchessault turned it into an impromptu roast of the unsuspecting Theodore.

They had good reason to be in a good mood. The win also kept Vegas atop the division. The Golden Knights have led the West in points percentage almost every day this season, and a loss, even in overtime, would have ceded the top spot to the Avalanche.

Marc-Andre Fleury made sure that wasn’t going to happen. Vegas came out hot in the first period, but a listless power play seemed to change the momentum in Colorado’s favor, as only a handful of acrobatic saves from Fleury kept the Avalanche off the scoreboard.

He finished with 34 saves, his third shutout of the season to tie him for the league lead. He has a .942 save percentage in 11 starts, harkening back to the magic of the inaugural season.

That set up Tuch in the second period with one skillful goal and one that was more of an accident. The first one was a thing of beauty, entering the zone on a power-play with speed, collecting a William Karlsson feed and beating goalie Philipp Grubauer one-on-one at 2:53 of the second.

It was the second game in a row with a goal for Tuch, and sometimes when you’re hot, you make your own luck. Later in the period he offered a back-hander to Grubauer, who turned it away easily. Fortunately for Vegas, Grubauer’s save rebounded onto the skate of Colorado defenseman Bowen Byram, and the puck settled into the net at 6:14 for a 2-0 lead.

That was Vegas’ third goal in a row scored by Tuch, who notched Vegas’ final tally in style at Lake Tahoe. That gave Tuch seven goals on the season, one behind team-leader Max Pacioretty.

What’s even more impressive is that his two-goal game came as part of the top line alongside Chandler Stephenson and Mark Stone, where he had to fight for offense against Colorado’s top line, including MacKinnon.

“We really tried to be hard against their top guys and I think it led to a little bit of offense, too,” Tuch said. “We were able to bury our chances. We played them hard tonight, we didn’t give them any space and it worked out for us.”

Marchessault made sure Tuch wasn’t alone in the second period. He laced one through Grubauer’s legs at the 11:06 mark for Vegas’ third goal of the frame.

The offense was starting to become a concern. Vegas didn’t have much trouble scoring against some of the lower teams in the West Division’s standings, but managed just five goals in the first three games against the Avalanche.

The Golden Knights and Avalanche figure to be fighting at or near the top of the division all season — they have four more games remaining against each other before a potential clash in the playoffs.

DeBoer said the Golden Knights wanted to send a message, that after two losses they weren’t going to back down. Then they shut out the Avalanche in their building. That’ll do it.

“We definitely weren’t happy with the results of the last couple of games,” defenseman Shea Theodore said. “I thought a lot of guys stepped up tonight. We played the whole game pretty solid and when we weren’t we had (Fleury) back there standing on his head, so that’s always nice.”

Mountain West tournament to be played without fans