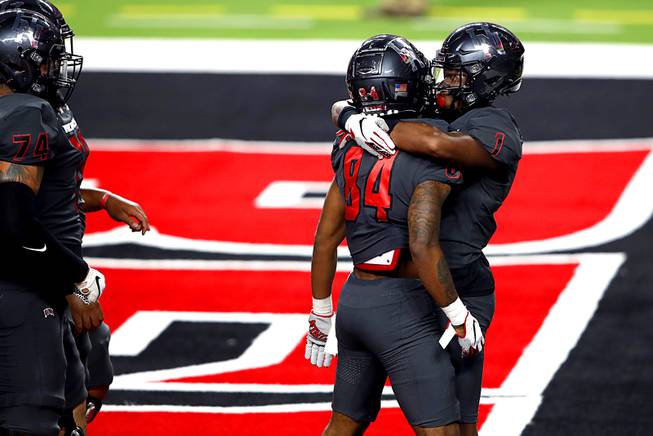 UNLV’s passing game didn’t exactly pop last year, and the team’s quarterbacks took most of the blame for that. But if second-year head coach Marcus Arroyo is to get his offense humming in 2021, it’s going to take an improved performance from the receivers, too.

Midway through spring practice, Arroyo seems to like what he is seeing from that group so far.

“Lot of youth and a lot of young guys in there,” Arroyo said. “In college football a receiver has got to run and catch and play at a high level. That’s the nature of the beast right now. Bottom line for us to be an explosive offense, which we’ve built before, there’s a high demand at that position, and I think those guys have done a good job of trying to understand what our expectations are and work toward that goal.”

The situation at receiver was pretty bleak last year as UNLV went 0-6.

Kyle Williams burst onto the scene with 35 catches for 426 yards, earning Mountain West Freshman of the Year honors. That was the extent of the good news. Aside from Williams, UNLV got almost nothing from its assembled pass-catchers.

No other wide receiver had more than 10 catches. First-year wideout Zyell Griffin pulled in six passes for 118 yards, modest numbers that nonetheless made him the scarlet and gray’s second-leading receiver in terms of yardage.

Griffin, a 6-foot-2 native of Washington, believes that added reps in spring practice will improve the chemistry between UNLV’s quarterbacks and pass-catchers.

And for the young receivers like himself and Williams, Griffin thinks another year of experience will help boost production.

“Coming from high school to college is a big difference,” Griffin said. “I feel a lot more confident for sure because I’m a lot more familiar with the game.”

Though UNLV’s receivers figure to be better in 2021, Arroyo said there is still a lot of room for improvement before he’ll be satisfied with the depth chart at that position.

“I don’t think anybody in their first spring ball is going to look at the playbook and go, ‘Hey, we’ve got everything we want,’” Arroyo said. “We’re excited about the guys we’ve got…Excited about our group. Long way still to go.”

While Arroyo may be hard to please, Griffin said making an explosive play in practice is one thing that can reliably bring a smile to the coach’s face.