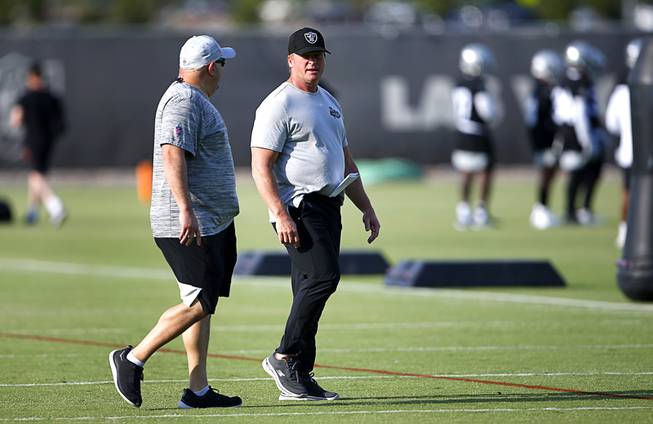 Head Coach Jon Gruden, center, is shown during a practice at the Raiders facility in Henderson Tuesday, June 15, 2021.

Jon Gruden is a self-described “people person,” so he never got used to the Zoom news conferences that dominated his first season in Las Vegas.

The fourth-year Raiders’ coach was much more in his element on Tuesday afternoon when he took the podium in the media room at the team’s Henderson headquarters for the first time.

“I’ve never been in this part of the building but it’s good to have a face-to-face meeting with the media for a change,” Gruden said.

All 90 players on the Raiders’ current roster had reported to the first day of training camp earlier in the day, and even more importantly to Gruden, they all arrived in shape and on their target weights. That put Gruden in an excitable mood, as he answered a wide range of questions for the next 20 minutes ahead of the Raiders’ first official practice of the year at 7:30 this morning.

Below are five of the most important points Gruden touched on during his initial news conference of the year.

1. The team is almost fully vaccinated

The NFL’s strict COVID-19 policies for the upcoming season have stimulated a lot of conversation this week.

Among the new rules for the 2021 season is a warning that teams with outbreaks coming from unvaccinated players face the possibility of forfeiting games without pay. It seems like a realistic scenario considering reports from earlier this month that several teams were struggling to reach the 85% vaccination threshold set by the NFL to loosen restrictions in team facilities.

The Associated Press reported only 10 teams had reached the number. The Raiders were not named as one of them, but based on Gruden’s Tuesday morning report, they are among the group.

Gruden reiterated that the entire staff was vaccinated and said the roster contained only “four or five guys” who were unvaccinated. With current 90-man rosters, that’s well above the 85% mark.

“We’re excited about that, but we’re also respectful of everyone’s personal opinion, so we have to weigh that as well, but when it comes to vaccinations, we think most of our people have done just that, gotten vaccinated,” he said.

2. Don’t come to any premature conclusions regarding the wide receivers

Competition to make the 53-man roster might be tightest at wide receiver, as 12 players reported to training camp at the position but only six are likely to be kept.

Some have speculated Jones could be one of the odd men out after failing to earn regular playing time during his first two seasons with the franchise, but Gruden gave him a vow of confidence.

“I don’t want anybody to forget about Zay Jones,” he said. “I don’t think we have a better conditioned athlete than Zay Jones.”

Gruden didn’t stop there, as he also named a second pass-catcher at the fringe of the roster.

The final 53-man roster won’t be decided until Aug. 31, and it likely won’t be until then that the Raiders’ full wide-receiver corps for the season is certain.

3. Expectations go beyond moderate improvement for the pass defense

The Raiders’ pass defense has ranked in the NFL’s bottom 10 by any and every measure since Gruden returned to the sidelines four years ago.

If new secondary additions like cornerback Casey Hayward and second-round draft pick Tre’von Moehrig could just help Las Vegas get towards the middle of the league, it could likely vault them into the playoffs. But Gruden made it clear he’s expecting more than that.

“If I’m a Raiders’ fan, I’m coming out here to watch practice and I’m keeping an eye on the secondary,” he said. “It should be a strength of ours. If it isn’t, we made some real mistakes.”

Other newcomers in the unit include a pair of free-agent signings in Karl Joseph and Rasul Douglas and a pair of rookies in Tyree Gillespie and Nate Hobbs. Combined with what the team hopes is improvement from returning starters Trayvon Mullen and Johnathan Abram, there are visions on this being one of the best Raiders’ defensive backfields in years.

Gruden reiterated as much when he touched on the secondary for a second time during his news conference.

“I’d be really upset if they’re not worth the price of admission,” he said.

4. Similarly, this year’s rookie class is being counted on immediately

When first asked about first-round draft pick Alex Leatherwood, Gruden said he didn’t want to draw too strong of conclusions before seeing the rookie in pads. But he eventually couldn’t help himself and started gushing over the tackle out of Alabama and a number of his NFL Draft classmates.

The only one of the team’s top six picks from April’s draft he didn’t mention by name was Moehrig, but the team’s excitement for him are pretty clear after they traded up to take the TCU safety at No. 43 overall.

On Leatherwood, Gruden said the Raiders, “have no doubt about him as a football player.” He reported third-round pick defensive end Malcolm Koonce has, “really made impression,” and fourth-round safety Gillespie is, “definitely in the picture,” for playing time.

Likewise, third-round linebacker Divine Deablo has, “big upside for us,” according to Gruden, once he returns in a couple weeks from a minor knee surgery. Fifth-round cornerback Hobbs got a strong report-card as well and could compete for early playing time in the slot.

There was a little more patience extended to last season’s rookie class at this time a year ago after they didn’t have the advantage of an in-person offseason program with the team during the first wave of the pandemic. That’s not the case going into the 2021 season, as Gruden and the coaching staff have gotten to know their incoming players up close and it’s done nothing but boost their excitement about them.

5. The Raiders are fully committed to Derek Carr

This one should be no surprise, but it still bears mentioning in an offseason where the Raiders were linked with a number of big-name quarterbacks reportedly seeking trades. Carr himself was even briefly named in a few trade rumors, but he said last month he would potentially retire over playing somewhere else.

While Gruden didn’t quite go that extreme in expressing loyalty, he reiterated his confidence in Carr for what feels like the 1,000th time.

“You just can’t worry about some of those swirling conversations,” Gruden said. “I was a part of those swirling conversations (while working for ESPN) for nine years. We have to earn our money, so don’t pay attention to everything being written. Derek knows what he’s all about and what kind of a quarterback he is, so it’s just trying not to listen to the elevator music and (not) worry about things that you can’t control.”

Carr will speak to media tomorrow after the team’s first practice of training camp as he enters into his eighth season with the franchise. If Carr wants to be as upbeat as his coach, his work might be cut out for him.