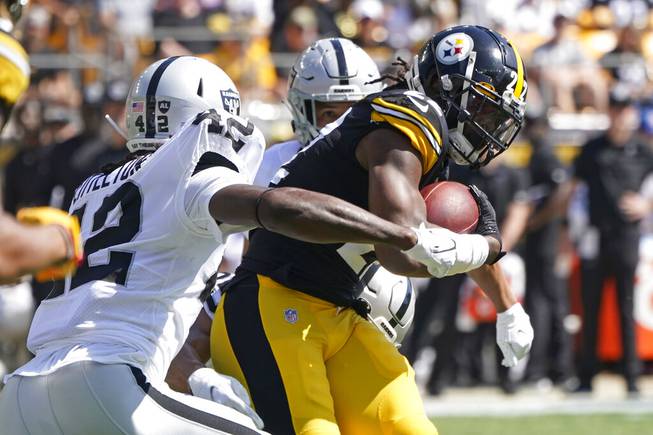 Analysis: Raiders defense steps up in win at Pittsburgh

Pittsburgh Steelers running back Najee Harris (22) is tackled by Las Vegas Raiders inside linebacker Cory Littleton (42) and defensive back Johnathan Abram, rear, during the first half of an NFL football game in Pittsburgh, Sunday, Sept. 19, 2021.

The Raiders are 2-0 after grinding out an impressive 26-17 win at Pittsburgh.

Instant takeaways from the victory:

Is the Raiders defense for real? After two weeks, it’s beginning to look that way.

Las Vegas smothered the Steelers for four quarters, especially in the passing game as Ben Roethlisberger was hit 10 times and sacked twice on 42 dropbacks. When he was able to get off a pass, the Raiders secondary was in position to make plays on the ball as the team’s cornerbacks recorded five pass breakups.

It was a team effort, with defenders on every level getting in on the action. Maxx Crosby got double-teamed on a good amount of passing plays, so defensive tackle Johnathan Hankins took advantage by beating single coverage to register a sack. The pass rush forced Roethlisberger into a long prayer of a heave, which Trayvon Mullen was able to pick off easily. Casey Hayward knocked down a long pass. At one point late in the third quarter, Mullen had to leave the field due to injury; second-year corner Damon Arnette took his place and the maligned former first-round pick immediately broke up consecutive passes on second and third down.

It wasn’t perfect. The Steelers’ second touchdown came on a 3rd-and-long swing pass to Najee Harris, who easily shed the tackle attempt of reserve safety Dallin Leavitt before turning upfield for a 25-yard score. But for the most part the Raiders forced the issue, which is something they couldn’t do last year. The early returns for new defensive coordinator Gus Bradley are encouraging.

The offense started slow and was unable to cash in on a couple early trips to the red zone, but Derek Carr got hot in the second half for the second straight week to help Las Vegas pull away.

And he was able to do it without targeting Darren Waller relentlessly. Pittsburgh devoted a lot of attention (and usually a second defender) to covering Waller downfield, so Carr looked elsewhere and did a great job of utilizing his entire receiving corps to complete 28-of-37 passes for two touchdowns and no interceptions.

When the Steelers shaded toward Waller on the goal line, Carr went to the other side of the field and dropped in a beautiful 9-yard touchdown pass to No. 2 tight end Foster Moreau to make it 16-7 midway through the third quarter. On their next drive, Carr fired deep to Henry Ruggs on third down and let the second-year speedster run under the perfectly placed ball for a 61-yard score.

As usual, Hunter Renfrow had chain-moving catches on third down to keep both touchdown drives alive.

After the bomb to Ruggs, a giddy Carr skipped to the sideline and gave Jon Gruden a hug. Carr is now completing 66.7 percent of his passes on the season, with 817 yards, four touchdowns and one interception. In not so many words, Carr is on fire right now.

The Raiders have started 2-0 for the second straight season and for the third time in five years. That’s the good news.

The to-be-determined news is that they didn’t make the playoffs in either of those other two seasons, so this team should understand that it’s a long season and a quick start is no guarantee that things are going to end well.

Last year the Raiders beat Carolina and New Orleans to open the schedule, then immediately gave back all of that momentum by losing to New England and Buffalo. The 2021 squad will host a Dolphins team next week that may be without their starting quarterback; given what we’ve seen so far—namely, wins over two 2020 playoff teams—anything other than a 3-0 start would qualify as a disappointment.