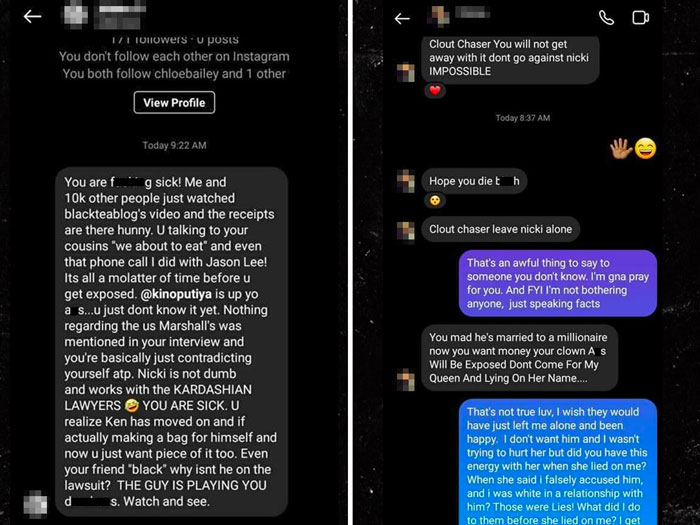 Jennifer Hough is facing backlash after speaking out against Nicki Minaj and her husband, Kenneth Petty.

Hough, who Petty was convicted of trying to rape in 1995, gave her first on-camera interview since suing the couple for allegedly harassing and intimidating her to not speak about the incident.

Following her appearance on “The Real” earlier in the week, Hough’s attorney, Tyrone Blackburn, says that his client has been bombarded with hate-filled messages from Nicki’s legion of fans.

TMZ has some obtained some of the DMs, including death threats and even one where Hough’s personal contact info was shared.

“Nicki is not dumb and works with the Kardashian lawyers. You are sick,” wrote one of Nicki’s Barbz, while another called Hough a “clout chaser” and wished death upon her. “Hope you die bitch…Your clown ass will be exposed don’t come for my queen.”

Hough replied to some of the messages. “I’m not bothering anyone. just speaking facts,” she wrote. “I wish they would have just left me alone and been happy.”

However, she decided to speak out because she’s “tired of being afraid.” “I feel like the actions that were taken in regards to this whole situation put me in a different type of fear at my age now, and it was wrong,” she said. “And I don’t want to be afraid anymore. The only way not to be afraid is to continue to speak up.”

Hough was the victim in Petty’s 1995 conviction for first-degree attempted rape in New York. He had to register as a sex offender and recently accepted a plea deal for not registering in California.

In August, Hough filed a lawsuit against Minaj and Petty, accusing them of witness intimidation, emotional distress, harassment, assault, and battery. She is seeking damages as well as statutory damages and attorney’s fees.

On the positive side, Hough has also received support from women, who say that her appearance has inspired them to come forward and share their own stories.

Joyner Lucas and J. Cole Team Up on ‘Your Heart’