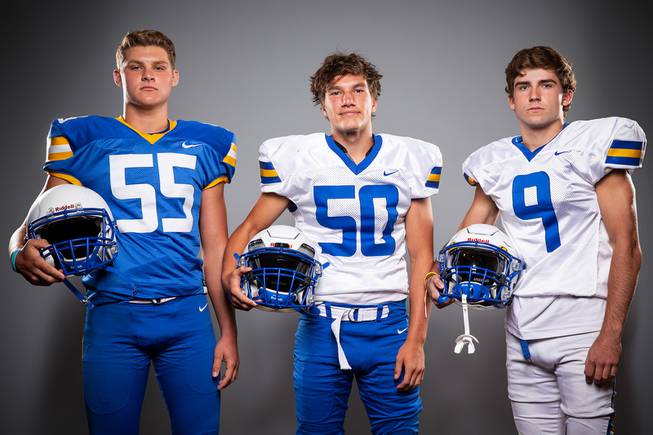 Members of the Moapa Valley High School football team are pictured during the Las Vegas Sun’s high school football media day at the Red Rock Resort on August 3rd, 2021. They include, from left, Scott Hardy, Sam Wheeler and Austin Heiselbetz.

Moapa Valley football coach Brent Lewis had watched his team start slow in the past two weeks, urging players to not wait until the second half to start playing with urgency.

That message was apparently received tonight, as the Pirates scored 28 first-quarter points in a 48-6 win over Valley in improving to 6-0 on the season.

Gunner Redd caught a pair of touchdown passes from Peyton Neilson, who also connected with Dustin Gordon for a touchdown. Redd, Ben Jolley and Jayme Carvajal had rushing touchdowns.

Ethan Stankosky and Landon Wrzesinski each had about 50 rushing yards.