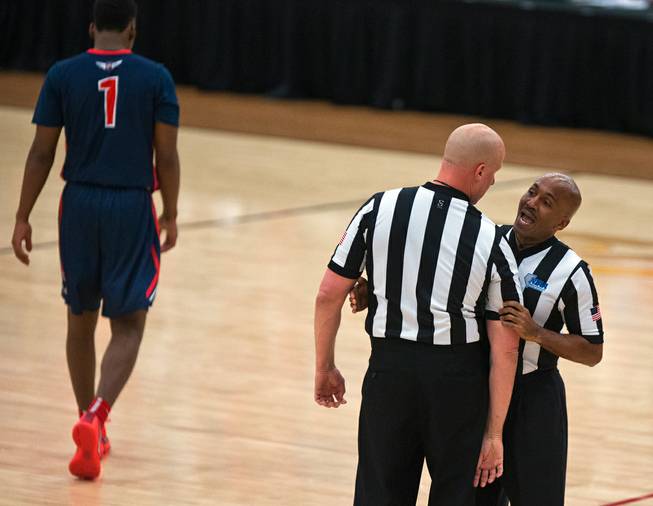 What is happening to our sense of sportsmanship?

Referees discuss a technical foul on Findlay Prep as they battle Bishop Gorman during basketball at the South Point Casino on Saturday, January 23, 2016.

The club basketball game featured a few lead changes in the final minute and ultimately went into overtime. Emotions on both sides were running high and the play became physical.

The final buzzer went off with players from one team racing to the center of the court to celebrate a victory.

It was a different scene for the losing team’s players, who sulked on the sideline feeling as if they were cheated. But instead of packing up their gear to clear out for the next team, coaches went looking for answers.

For Vince Kristosik, the veteran Las Vegas official who worked the game, that’s where the nightmare began. Kristosik was alone in the gym’s bathroom afterward when he was approached by three coaches, whom he said got in his face, began to argue and were downright intimidating. He was frightened and raced out.

The Southern Nevada Officials Association is facing a significant shortage of referees for high school and youth sports, and the crunch can be partially attributed to the way officials are treated by parents and coaches, Kristosik said.

“The sportsmanship has been going down every year. It’s a sad state of affairs,” said Kristosik, who is the association’s president. “At some point, the officials have had enough. They are tired of getting harassed and screamed at, because the money isn’t that good.”

The lead official for a high school varsity football game makes $71.50. But for other positions on the crew, such as the clock operator, it pays about $27. When you consider the price of fueling up a car, it’s arguably volunteer work for the love of the game.

Those volunteers are dwindling. (Those who want to become a referee can start by filling out an interest form at snoaofficials.com.)

Some are retirees and not willing to risk exposure to coronavirus for a few extra dollars, others have taken new jobs during the pandemic and can’t break away for a game, and some have found other forms of recreation in the 18 months away from calling games during COVID-19 closures. And, of course, referees are frustrated with being treated like second-class citizens by overzealous parents and coaches.

“Kids don’t make all of the shots, every decision a coach makes isn’t going to be right, and all of the games we work, we aren’t going to get every call correct,” Kristosik said. “When an official has a bad game or makes bad calls in game, nobody feels worse than the official.”

For football, high school games call for five officials on the field, three on the chain crew and two on the clock — or about 300 bodies needed to cover all games on a Friday night. On Sept. 24, the association assigned just 180.

The shortage has gotten so bad that the association is using parent or student volunteers to run the chain crew, or has thrown someone with little experience onto the big stage of Friday night.

In soccer, which usually has a three-referee crew, some lower-level games are staffed by one official. The association went from a roster of 104 soccer officials to 65.

The association’s juggling act of staffing all games has become so dire that Kristosik has a plea to residents: “We need officials to make sure games are played.”

And another plea: He’s urging coaches, players and fans to treat these men and women calling the game with the dignity they deserve.

Remember, high school and youth sports are recreation to further enrich the lives our children. It’s a chance for exercise, friendship, responsibility and feeling like a bigger part of the school community.

Coaches must be good examples for children in how they interact with officials by shaking their hand after the game, offering them a snack if one is available, and above all, by being courteous.

We must all hold each other accountable, starting with coaches who need to stress to families that aggressive behavior toward officials is unacceptable. School administrators and rec league management need to provide proper security to help the referees get safely to the parking lot. (I can’t believe that sentence even had to be written).

“If a coach handles players who display bad sportsmanship by taking them out of the game and sitting them down to explain why it’s not right, the parents see that and follow suit,” Kristosik said.

In a 162-question survey by the National Association of Sports Officials, 47% of 17,487 respondents indicated that they had felt threatened by coaches and fans after a game. It’s mind-boggling that someone would treat another human being this way, let alone someone who is working to help provide an experience for children.

“Some of the coaches on the sideline don’t appreciate what we do on the field,” said Thomas Donoff, a football official with the association. “They think they are in the NFL or college and are trying to prove something. They are malicious with their language and treat us like third-rate citizens. The younger officials will tell you they aren’t going to get their butt chewed for this pay and (so they) quit.”

Nobody should be treated like that at work — not restaurant staff, grocery store workers or the receptionist at the doctor’s office.

Vegas, we have to do better.

Raiders can’t claw back on Chargers, fall for first time this season