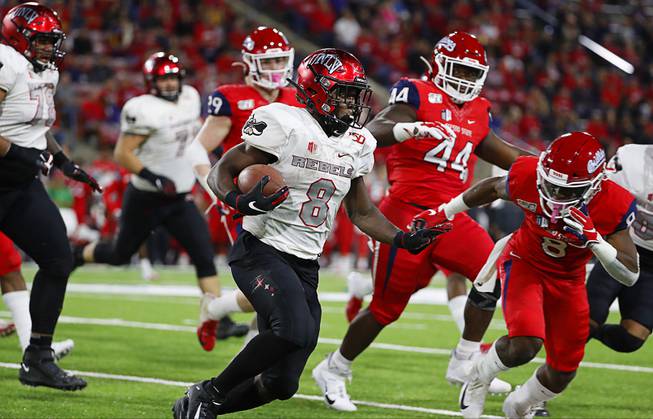 UNLV running back Charles Williams heads around the corner against Fresno State during the first half of an NCAA college football game in Fresno, Calif., Friday, Oct. 18, 2019.

The main difference between the 2020 UNLV football season and the 2021 campaign has been competitiveness.

The records are similar. Last year UNLV went 0-6 under new head coach Marcus Arroyo, and this season the team has started 0-5. But the 2020 squad was blown out every week, with its closest loss coming by a 13-point margin; the current squad has been close enough to taste victory several times, most recently in last week’s frustrating 24-17 defeat at UTSA.

In each of the tight losses (and especially against UTSA), several pivotal plays down the stretch went against UNLV, and some of those negative plays were self-inflicted. To get into the W column for the first time under Arroyo, UNLV is going to have to come through in those moments that can swing a team’s win probability in the span of a few seconds.

Senior running back Charles Williams said the difference between winning and losing can be as simple as a handful of plays.

“We’re right there,” Williams said. “We’re just two to four plays away from getting where we want to be at as a team. I think the execution part is getting better each week, we’ve just got to be dialed in on those critical downs or those situational football moments.”

The hard part for Williams and his teammates is recognizing in real time which plays are going to be game-changers. Sometimes those plays are evident before the snap — like when a UNLV defender jumped offsides on a 4th-and-short on UTSA’s final drive. But oftentimes those crucial moments don’t reveal themselves until after the final whistle.

Junior linebacker Jacoby Windmon has been one of UNLV’s top defensive playmakers with 1.5 sacks, 2.5 tackles for loss and a pass defensed, but he admits it’s almost impossible to see those game-defining moments coming ahead of time.

“When you’re in the heat of the moment, you don’t know what play it’s going to specifically be that could cost the game or that could make the game a win,” Windmon said. “When you get in that film room and you see, if I would have done this play a lot better or if I would have been a lot faster getting off this block or caught the interception instead of batting the ball down it could have changed the whole perspective of the game.”

After a well-timed bye week that allowed some of the more banged-up players on the roster to get healthy — Arroyo said quarterbacks Doug Brumfield, Cameron Friel and Tate Martell all benefitted greatly from the extra rest and have returned to practice — UNLV will host Utah State (3-2, 1-1 Mountain West) on Saturday in a game that has the scarlet and gray listed as 6-point underdogs.

That portends another close contest in which one or two plays could decide the outcome.

Williams tries not to consider the magnitude of any single play as he’s breaking the huddle, as putting additional emphasis on a given snap could break focus or lead to disappointment.

“You don’t really want to think about a play during the course of the game because it’s always a next-play mentality,” Williams said. “For instance, if we don’t get a fourth down, you can’t get stuck on that because then it’s going to affect your whole entire mentality going into the next drive or next series.”