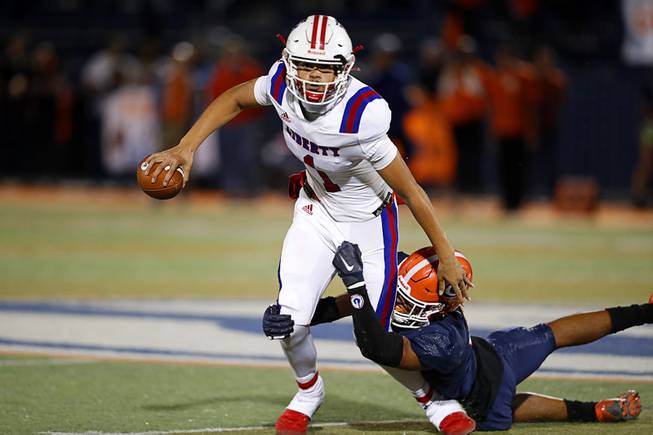 Liberty quarterback Jayden Maiava (1) is sacked for a loss by Bishop Gorman’s Cyrus Moss (11) during the first half of the Southern Region football championship at Bishop Gorman High School Friday, Nov. 12, 2021.

For all of the Bishop Gorman football team’s eye-popping stats over the past 10-plus years during its rise to national prominence, this one could be the most impressive: The Gaels, since moving into their new campus in Summerlin in 2007, haven’t lost a home game to a Las Vegas opponent.

Gorman is out to avenge the setback against visiting Liberty tonight in the class 5A Southern Regional championship game, a rematch two years in the making after the 2020 season was shelved because of the pandemic.

In between the defeats to local opponents, Gorman won 10 straight state championships, three mythical national high school championships and had a 55-game winning streak. So, when Liberty upset the Gaels in the 2019 regional finals on the way to capturing the state championship, it easily made national news. Mighty Gorman had fallen — finally.

Those eyes return tonight to Gorman’s Fertitta Field, where the Gaels debuted in the 2007 playoffs over Thanksgiving weekend in a back-and-forth affair against Palo Verde. They rallied to win in the final seconds and have rarely been challenged against Nevada teams since.

For more, read our game preview.

It’s not the only game on the local docket tonight, as the class 4A state semifinals feature Coronado at Silverado, and Shadow Ridge against host Las Vegas.

The state championship games are Thursday at Allegiant Stadium. In a few hours, we’ll know which teams will be playing for the hardware. Check back all night for updates, and remember to send game information on Twitter to @raybrewer21 or using #sunstandout.