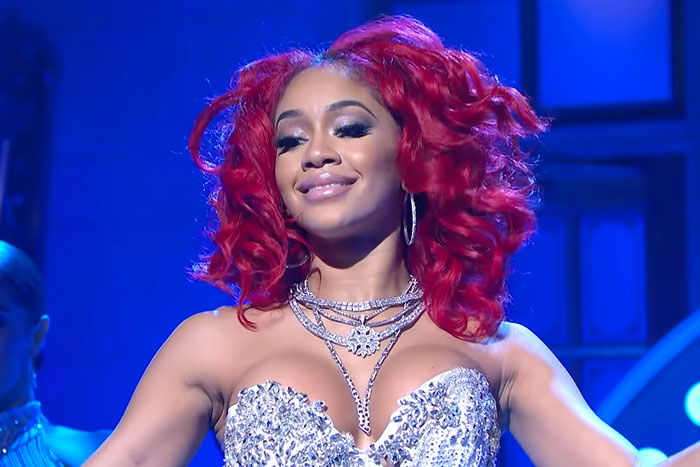 Saweetie brought Icy Season to “Saturday Night Live” when she made her debut as musical guest this weekend.

For her first performance of the evening, she delivered a medley of two of her biggest hits, “Tap In” and “Best Friend.” Wearing an icy blue gown, a red-haired Saweetie opened her glamorous set with a lounge rendition of “Tap In.” After removing the bottom portion of her dress, she turned up to her Doja Cat-assisted anthem “Best Friend” as she and her ballerina-like dancers showed off their flexibility on a ballet barre.

She returned for the first performance of her new single “Icy Chain,” which dropped on Friday. With her “ICY” logo lit up behind her, Saweetie and her dancers heat up Studio 8H with their twerk moves.

Saweetie is now readying her new project Icy Season, which is set to arrive prior to her oft-delayed debut album Pretty Bitch Music.

She recently released “Get It Girl” as part of the soundtrack to Season 5 of “Insecure.” Additionally, her song “Attitude” can be heard on the Halle Berry and Cardi B-produced Bruised soundtrack.

Offset Welcomes His Brother Home After 15 Years in Prison