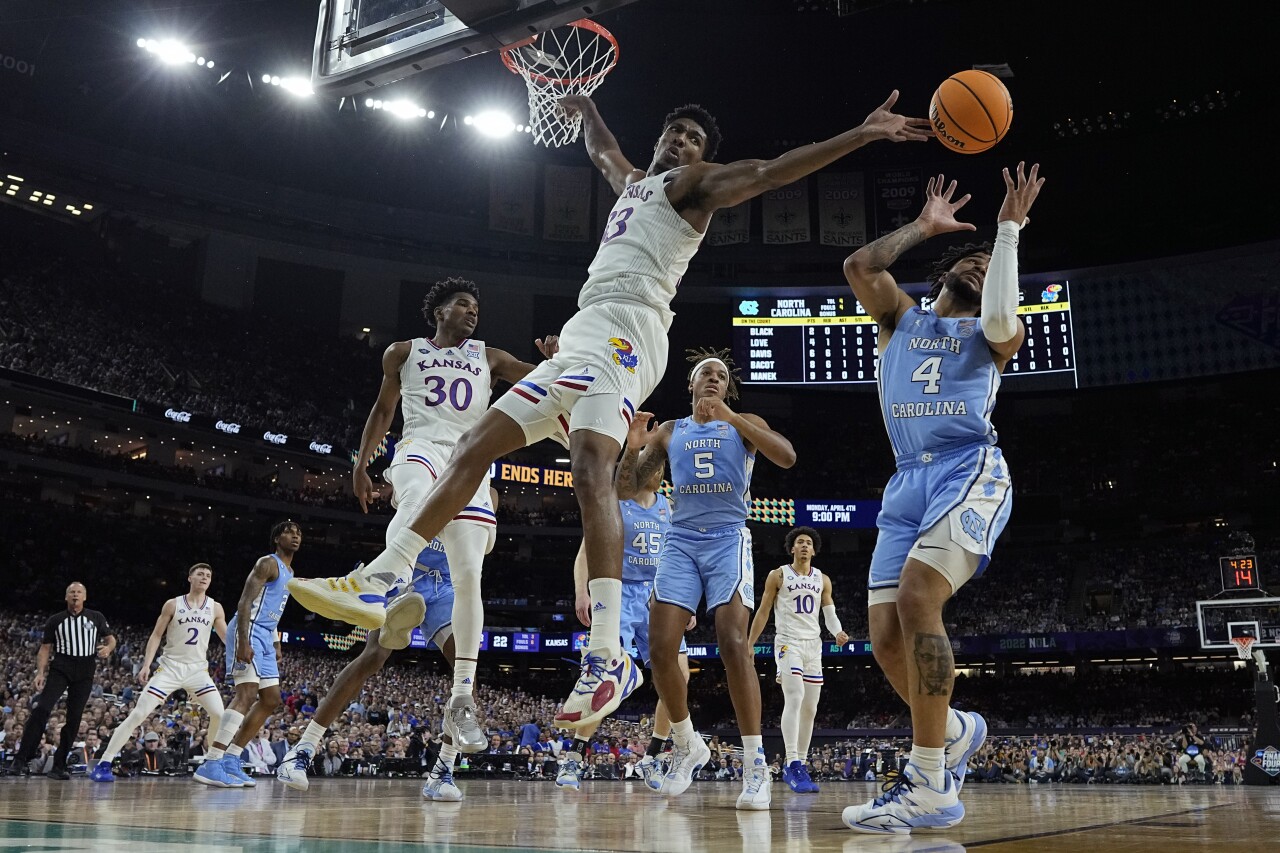 NEW ORLEANS (AP) — Kansas brought its fourth NCAA title back home Monday thanks to a second-half flurry that erased a 16-point deficit and eventually overcame North Carolina 72-69 in an epic battle of power programs.

It was the biggest comeback in title game history, surpassing Kentucky’s 10-point rally to beat Utah in 1998.

David McCormack scored the go-ahead bucket from close range with 1:21 left, then another at the 22-second mark to put the Jayhawks ahead by three. North Carolina missed its final four shots, including Caleb Love’s desperation 3 at the buzzer. His heave barely grazed rim after officials ruled that Kansas guard DaJuan Harris Jr., stepped out on an inbounds pass with 4.3 seconds left.

The Tar Heels went scoreless over the final 1:41.

After McCormick’s go-ahead bucket, Love’s shot got blocked but North Carolina got an offensive rebound and fed to Armando Bacot under the bucket. But the big man lost his footing and turned it over, then limped off the court, unable to return.

That put Brady Manek, not as good a defender, on McCormack, and the Kansas big man backed in Manek for the shot that put the Jayhawks ahead by three.

McCormack and Jalen Wilson led KU with 15 points each. Christian Braun scored 10 of his 12 in the second half and transfer Remy Walker had 11 of his 14 over the final 20 minutes, as the Jayhawks turned what looked like a lost cause into one of the sweetest wins ever.

Carolina had scored 16 straight points late in the first half to open a 40-25 advantage at the break, but top-seeded KU (34-6) went on a 31-10 run over the opening 10 minutes of the second to take a six-point lead and set up a fantastic finish.

Bacot had 15 points and 15 rebounds to become the first player to record double-doubles in all six tournament games. He finished the season with 31 double-doubles, but it was not enough. Carolina was trying to join 1985 Villanova as only the second 8 seed to win March Madness.

Hunter Biden and the media | CARTOONS