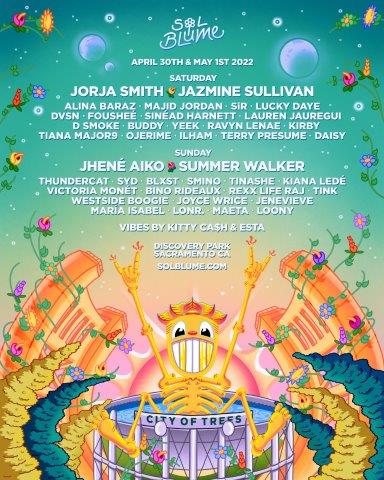 With the third Sol Blume less than three weeks away, Jazmine Sullivan has been added to the 2022 music festival schedule by the local founder of one of the year’s largest annual R&B events.

Jazmine Sullivan will join previously announced headliners Summer Walker, Jhené Aiko, and Jorja Smith to start off Day 1 festivities at Discovery Park in Sacramento. Sol Blume has become one of, if not the only, big US music festivals this year to showcase a lineup composed entirely of Black female headliners, thanks to this addition to the lineup.

Sol Blume is excited to add Jazmine Sullivan as one of this year’s festival headliners. Blumers will be treated to a number of R&B hits from the Grammy Award-winning powerhouse songstress, who recently released her latest album Heaux Tales just last year to critical acclaim following 2015’s Reality Show.

Unfortunately, due to unforeseen circumstances, PartyNextDoor is now unable to make it to Sol Blume this spring. We hope to invite him back to Sacramento again soon!

You can see the complete lineup below and tickets can be purchased here.

Chris Paul Teams with Lids on “They Gave Us Game” Initiative

The Source |Rihanna Dishes on Pregnancy, Love, And Baby With A$AP Rocky.