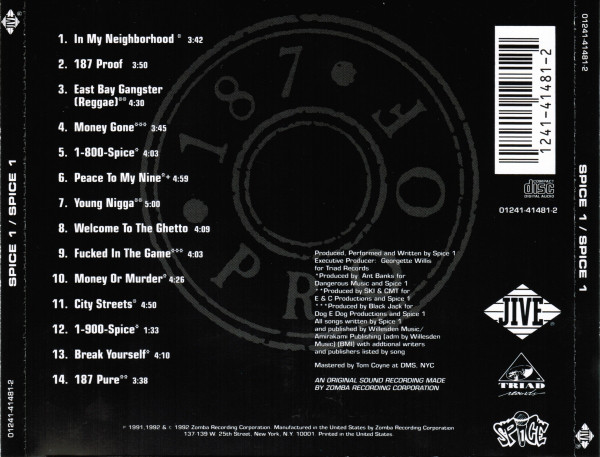 Whether you’re hanging in Coachella Valley or simply mourning the loss of Crenshaw’s fallen hero Nipsey Hussle like the rest of us, West Coast Rap is definitely being bumped at high volumes this weekend. That’s why we had to show some love to the Hayward homie Spice 1 on this lovely Sunday, which happens to fall on the 27th anniversary of his debut self-titled album.

Two years before appearing alongside MC Eiht and Scarface on our June ’94 cover (Issue #57), the rapper born Robert Lee Green Jr. delivered this banger for the Bay Area, which went on to reach way beyond his hood. The album was a big label follow-up to his well-received street EP Let It Be Known, which sold almost 100K in pure sales as an independent release. Once Jive came into the picture, the seven-song project was re-released and retitled as Spice 1, including five songs from the original project in addition to nine new ones. The switch up paid off, with the revamped version giving us the classic cut “Welcome to the Ghetto” and going on to sell almost half a million records.

The tracks on Spice 1 sound like quintessential G-Funk, translated through singles like “187 Proof” and the reggae-tinged “East Bay Gangster,” all the way to deep cuts like “Peace to My Nine” and the low-rider classic “City Streets.” It’s clear to see his style & delivery is inspired by the rap icon that discovered him — Spice 1 hails from Oakland’s The Dangerous Crew created by Too $hort — but the connection is less “flow biting” and more “of the same kin.” At the end of the day, it all just sounds like good gangsta rap.

The initial success of the album helped it rank in the top 20 of Billboard’s R&B/Hip-Hop Albums chart at #14, later achieving gold certification by RIAA. “Welcome to the Ghetto” proved to be a hit as well, rising to #39 on the Hot R&B/Hip Hop Singles & Tracks chart and also appearing on the Hot Rap Singles where it faired the best at #5. It ultimately marked a good start to a career that would go on to produce 12 studio albums and more than a handful of compilation LPs and collab albums, the latest being as recent as 2015 with his Bossolo-assisted project Thug Therapy.

We crowned him as one of the 115 greatest MCs from 1988 to 2003 for our 15th anniversary (Issue #167), and we stand by that sentiment as he rings in 27 years of his debut project. The Bay Area is home to an important sound and time in Hip-Hop, and Spice 1 helped cultivate that. Salute, king!