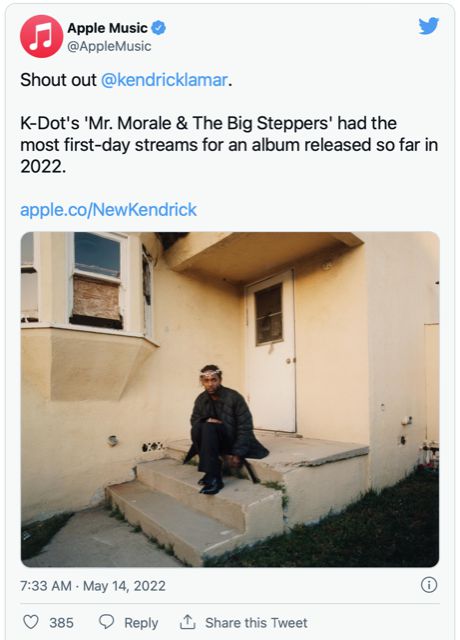 Kendrick Lamar’s Mr. Morale and the Big Steppers is killing the Apple Music charts. On release day, Kendrick’s new album broke the record for the highest first-day streams for an album released in 2022. Songs from the album currently held the top 14 spots on the Apple Music Songs Chart.

The new album, Lamar’s last on Top Dawg Entertainment, is the rapper’s first since 2017’s Pulitzer Prize-winning Damn. Mr. Morale was preceded by “The Heart Pt. 5,” which instantly trended on social media for the lyrical content and the face morphing of Lamar into Kanye West, Nipsey Hussle, Will Smith, and more.

The cover for the album features Kendrick Lamar’s partner, Whitney Alford, and their two children. The first time Kendrick had provided an image of his family.

The album also features production from a crop of Hip-Hop elite, including Boi-1da, Soundwave, The Alchemist, Dahi, DJ Khalil, Cardo, Pharrell, and more.

You can hear the new album from the Hip-Hop legend below.

The Source |Mary J. Blige Declares “I was Ghetto Fabulous and I still am” During Her Acceptance Speech At The 2022 Billboard Music Awards