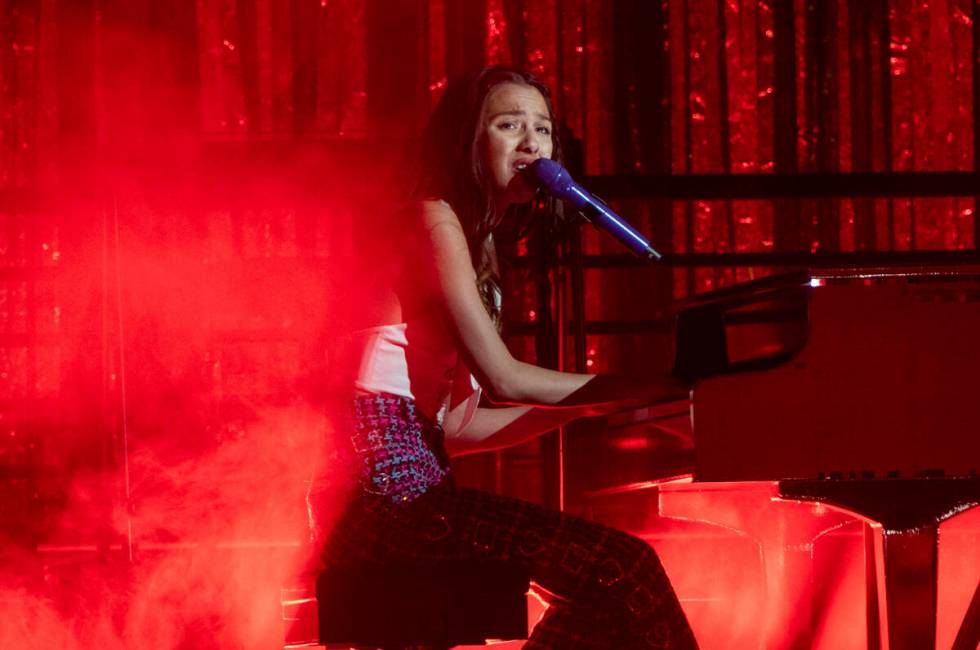 Fresh from winning a leading seven trophies, including top new artist and top female artist, at Sunday’s Billboard Music Awards at the MGM Grand Garden, Olivia Rodrigo is back in Las Vegas, albeit in smaller confines. The “Drivers License” singer is bringing her “Sour Tour” to the Chelsea at The Cosmopolitan of Las Vegas at 8 p.m. Friday. The show sold out long ago, but tickets are available on resale sites.

Struggling actor Michael Dorsey becomes a sensation on Broadway — but only after he creates an alter ego, an up-and-coming actress named Dorothy Michaels — in “Tootsie.” The musical, based on the 1982 Dustin Hoffman comedy that won Jessica Lange an Oscar for best supporting actress, closes out the 2021-22 Broadway Las Vegas Series. See it at 7:30 p.m. Tuesday through May 29, with additional 2 p.m. matinees May 28 and 29, in Reynolds Hall at The Smith Center. Tickets start at $30 at thesmithcenter.com.

Look no further than Symphony Park for a celebration of the arts throughout the community with performances by local acts Frankie Moreno, Paige and the Overtones and Zach Ryan followed by featured artwork from the city’s own arts organizations and vendors. The excitement doesn’t end there as the festival also provides food and refreshments while the kids enjoy hands-on activities provided by the Discovery Children’s Museum. The free outdoor event runs from 10 a.m. to 3 p.m. Saturday.

Almost six decades ago, 32 African countries signed the Charter of the Organization of African Unity, later evolving into the African Union. Since then, May 25 has annually reflected Africa’s progress in the liberation movement. Africa Day is being honored at Craig Ranch Regional Park from 11 a.m. to 4 p.m. Saturday during a free family-friendly cultural experience featuring authentic Africa-influenced dishes and beverages, drum circles, face painting and music.

Yeah, Silk Sonic is cool and all, but long before that throwback R&B duo decamped for a residency on the Strip, Vegas had its own old school-minded funk dynamos in The Soul Juice Band. Fronted by singer/harmonica ace David Tatlock, the 10-piece band combines a hair-on-fire horn quintet with purring Hammond B3 organ to supply dance floors with some serious Juice. On Friday, the group will host a record release party for its new self-titled album, with a portion of proceeds and new toys and clothes collected at the show to be given to Child Haven through the Kidz Uplifting Kidz Foundation, a nonprofit dedicated to funding normalcy for children in Clark County foster care. The show starts at 7 p.m. at The Usual Place, 100 S. Maryland Parkway. Tickets are $25 in advance, $30 day of show; eventbrite.com.

Shakespeare on the Plaza

“Double, double, toil and trouble; fire burn, and cauldron bubble,” the three witches of “Macbeth” conjure as they unleash mystical mayhem; only this time, they will release their spells in the Water Street Plaza of Henderson, where the Shakespeare Festival has returned to perform its adaptation of the tragic tale of betrayal, murder and greed. The performance takes place at 7:30 p.m. Friday and Saturday and May 26 to 28 Tickets are $20; nevadashakespearefestival.com.

Head down “The Path of Wrath” with Bay Area blackened hardcore troupe Wolf King, a scorched-throat metal quartet whose underground sound is worthy of excavation. The group hits Vegas like a cinder block hurled at a sandcastle along with death metallers Beast of Nod, prog metallers Neck of the Woods and locals Eyes of Perdition and Godless Throne at 7 p.m. Wednesday at The Dive Bar, 4110 S. Maryland Parkway. Tickets are $12 in advance, $15 day of show; eventbrite.com.

Who says they don’t have religion? | CARTOONS

He was afraid of missing out | CARTOONS