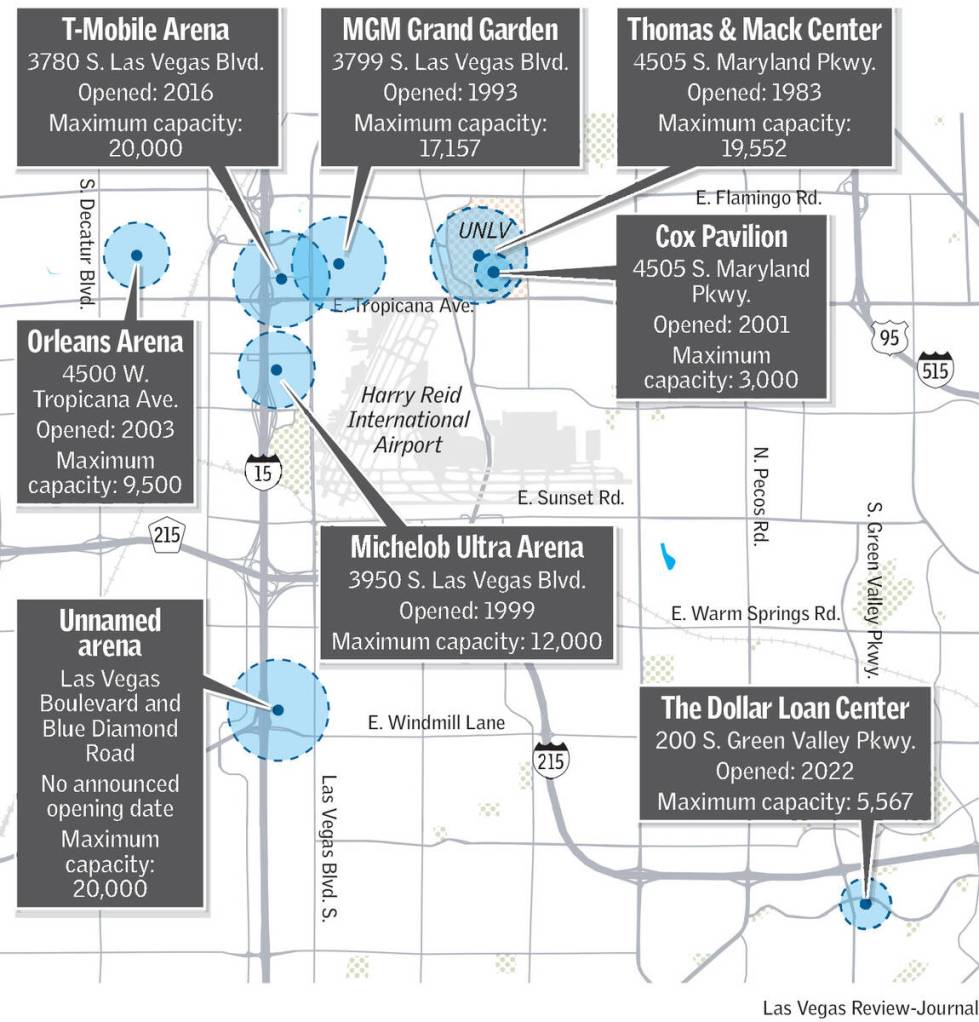 Even those who study sports venues for a living can only guess at Las Vegas’ capacity for arenas.

Noted arena builder Tim Leiweke, CEO of Oak View Group, believes there remains room for at least one more as he puts his money and effort behind building a 20,000-seat, $1 billion arena south of the Strip, aiming for a future NBA team.

This in a marketplace that includes T-Mobile Arena, MGM Grand Garden Arena, Michelob Ultra Arena and the Thomas & Mack Center — all with at least 12,000 seats. That’s in addition to Orleans Arena, The Dollar Loan Center and Cox Pavilion, which were built to accommodate smaller crowds.

Victor Matheson, a sports economist and Holy Cross professor, said New York and Los Angeles are the only markets he would typically say would be capable of effectively handling multiple venues. But he said Las Vegas could be an exception.

“Vegas is so uniquely different than everyone else,” Matheson said. “It’s not the tours coming through as much as one artist is doing 60 days or however many. So that makes it a little bit hard to understand.

“But in pretty much every other city that’s not Los Angeles or New York — because those are just gigantic — putting two NBA-type arenas has often been problematic for the cities involved.”

Going forward, however, those types of decisions become more difficult.

“I don’t know where that is, but at some point, you get diluted enough that you can’t have enough events to go around for all the venues to make them all make sense,” Hill said.

The question is whether Las Vegas has reached that point or will get there soon.

Las Vegas, which has a metropolitan population of 2.3 million, is in rarefed air when it comes to large arenas. Not including the UNLV-operated Thomas & Mack Center, the area has three privately owned arenas that seat at least 12,000.

Only New York and Los Angeles, with a combined metro population of nearly 33 million, have more venues of that scale that are municipally or privately owned. New York has five, a number L.A. will reach when Intuit Dome opens in 2024 with the NBA’s Clippers as the primary occupant.

Matheson said the Phoenix area and South Florida provide warning signs for any other city looking to add multiple arenas.

In Phoenix, the NBA’s Suns and WNBA’s Mercury play at the downtown Footprint Center. Gila River Arena in suburban Glendale was home to the NHL’s Coyotes, but the team will move to Arizona State’s 5,100-seat arena after a dispute over unpaid taxes. The Coyotes hope to stay in suburban Tempe for the long term and build an arena as part of a $1.7 billion project, but governmental approval of that project is not a certainty.

Gila River Arena, which already draws about half the number of concerts as Footprint Center, will sit empty for even more dates, leaving Footprint — owned by the city of Phoenix and managed by the Suns — as the only truly viable municipal or private major arena where the metro population is more than double that of Las Vegas. The city of Glendale owns Gila River.

“The problem (in the Phoenix area) is there’s just not that many events to fill up something,” Matheson said, “and if all of the sudden you are competing against another arena for that limited number of Beyonce days or Bruno Mars days or Cirque du Soleil days, then you run out of events before you run out of arenas.”

In South Florida, Miami’s FTX Arena competes with Sunrise’s FLA Live Arena and West Palm Beach’s iTHINK Financial Amphitheatre for events. The Miami and West Palm venues attract roughly the same number of concerts, dwarfing the amount in the Sunrise arena, which fills the vast majority of its dates for the NHL’s Panthers. FTX Arena not only regularly books concerts, but is home to the NBA’s Heat, making it the primary venue for the area of 6.1 million.

Minnesota’s Twin Cities, with a population of 3.7 million, faces a similar problem. Target Center in Minneapolis is the home for the NBA’s Timberwolves and WNBA’s Lynx, but it attracts only about a third of the concerts as St. Paul’s Xcel Energy Center, where the NHL’s Wild play.

“Most of the time, if you’ve got one big metro area, putting two arenas in makes both of those arenas have serious difficulty paying the bills,” Matheson said. “That’s the one (Twins Cities) that I have not heard of being the bigger problem of the two, although both of them got pretty hefty subsidies from their respective cities and someone else is paying a bunch of the bills. That makes it a little bit easier to stay in business.

“The South Florida one has been more of a deal, and of course, the Phoenix-Glendale situation has been a total debacle.”

The proliferation of arenas in Las Vegas has taken an enormous toll on the Thomas & Mack Center, which opened in 1983 and, without competition from a venue of its size, became an immediate cash cow for UNLV.

The nearly 20,000-seat arena regularly sold out Rebels basketball games during the height of that program’s popularity, and acts from U2 to Bruce Springsteen to Garth Brooks played there.

MGM Resorts oversees three major arenas: T-Mobile, the Grand Garden Arena and Michelob Ultra at Mandalay Bay. T-Mobile draws most of the high-profile acts and is home to the NHL’s Vegas Golden Knights, but the Grand Garden Arena remains viable even without an anchor tenant. Michelob Ultra has such a tenant in the WNBA’s Aces and another on the way from the National Lacrosse League.

“We’ve got multiple venues to offer events, so (promoters are) looking to see what the right fit is for their particular event,” said Dan Quinn, T-Mobile Arena and MGM Resorts International vice president and general manager. “We offer them venues of all sizes, and along with that, you get the marketing strength of MGM Resorts and all of our properties on the Strip and the visitation that we’re able to drive.”

Then there’s the MSG Sphere, one of the world’s most advanced arenas being built behind The Venetian. It will be a venue mainly catering to concerts, with the staging area not big enough for arena-style sports. Former UNLV and NBA player Jackie Robinson hopes to build an arena on the north end of the Strip as part of a $4.2 billion project that has been dragging for almost a decade.

It doesn’t stop there. A group is in negotiations with Major League Soccer team to bring an expansion team, and a smaller stadium is expected to follow. And if the MLB Athletics leave Oakland, California, for Las Vegas, they will likely build a $1 billion stadium on one of two sites team officials said they are considering.

If Leiweke’s arena comes to fruition — his track record includes venues from Los Angeles to Toronto to Seattle — there will be direct competition with T-Mobile for major events. Quinn downplayed the effect of a new arena, saying Las Vegas is attractive enough for multiple venues to succeed.

Marc Badain, the former longtime Raiders executive who was instrumental in the NFL team relocating to Las Vegas and the construction of Allegiant Stadium, is an Oak View partner and consultant. He said the timing follows the city’s roughly 10-year cycle of adding arenas.

By the time this arena would open its doors, it would be about a decade since T-Mobile did the same in 2016.

“So from that standpoint, it didn’t really seem out of the norm to me, and there’s certainly enough capacity,” Badain said.

The plan is to construct the arena south of the Strip and Harry Reid International Airport at Las Vegas Boulevard and Blue Diamond Road.

“If you look at where you can expand Las Vegas Boulevard, it’s going south,” Badain said. “So it was only a matter of time before that parcel of land got developed, and it was something that was looked at for the stadium project back five, six years ago. So that location isn’t necessarily a surprise to anyone.

“It’s just a matter of the density following, which you’ve got in the arena project we’re talking about. You’ve got the potential for the MLS stadium. You’ve got Brightline high-speed rail train station. So, you have a chance to really do a lot of development on that 260-, 270-acre parcel there.”

Las Vegas built its reputation by pushing the limits, and another arena would be the latest example of doing just that.

But would it be the right move?

Badain and his group clearly believe it is, whether or not the arena attracts an NBA team. They say there is enough demand for entertainment outside of sports.

“No other city really has the amount of visitation that this city has in sort of a contained space,” Badain said. “There might be more visitors to other locations around the world, but it’s scattered around tens of miles, whereas in Vegas, it’s pretty much a 5- to 10-mile radius for everything. So it’s got a much bigger demand for live entertainment here that continues to exist and that will continue to grow.”

Hill underscored that point by noting there are 300,000 tourists on any given day “looking for something great and fun to do.”

“Tim Leiweke probably knows as much about whether or not it makes sense to build a venue as anybody in the country,” Hill said. “So if he thinks that’s a good idea, it’s probably a good idea. If somebody else was doing it, I might feel differently about it.”

That NBA team Leiweke is building for? Don’t expect an expansion team any time soon to fill his arena.

“We are not discussing that at this time,” NBA commissioner Adam Silver said Thursday. “As I’ve said before, at some point, this league will invariably expand. Just not at this moment.”

Maybe Leiweke and Badain are correct that Las Vegas can handle another major arena, whether the NBA comes or not. Maybe that 2026 timeline will be just right for the NBA.

“We’ve been pretty clear — both Tim and myself have shared this — we’re not going to assume anything,” Badain said. “We’re not going to be presumptive. That’s a decision that has to be made by the commissioner and by 30 owners.

“It’s their league, and they’ll dictate what markets they go into. We’ll build an NBA-ready arena, but we’re not making any assumptions about them coming or coming to play there.”

No one really knows, however, what is Las Vegas’ capacity.

“Vegas is so weird that it’s not entirely clear that it can’t support way more of these things than a normal city,” Matheson said. “It obviously can, and maybe it has no limit on how many it can support.”