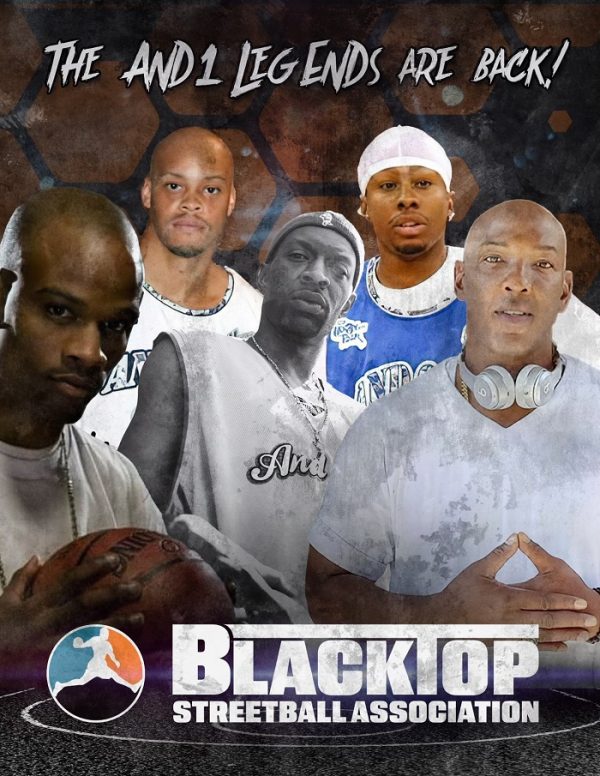 AND1 Streetball Legends Set to return in Blacktop Streetball Association

To put it as simple as possible, Street Ball is not dead! The ultimate truth is that there hasn’t been many major platforms to display the historic culture. That is, until now. For true basketball fans and inner city youth, the key difference between Streetball and Organized Ball was and still is the connection to the community.

Arguably the biggest factor in the growth and popularity of the culture were the original members of the AND 1 Team. And one of those original members, Waliyy “Main Event” Dixon has a vision that is coming to pass.  According to the high flyer “We respect the culture and will never compromise the integrity of Streetball”.

Dixon, aka “Main Event” has partnered with Commissioner Linda Hicks, who has been breaking barriers in sports her entire life;

and his Partner & Co-CEO Mark Bullock have linked up with his original AND1 brothers; including Mr.720, Skip To My Lou, Half Man Half Amazing, Hot Sauce, The Professor, Prime Objective, Helicopter, High Octane, Sick Wit It, The Professor and AO in forming the Blacktop Streetball Association. Initially, AND1 was just a sponsor. Now the real creators of the tour are back and excited to take Streetball to a level we havent seen before. “We are in the trenches!  Everyone wants the comfortability of playing inside, but this is streetball we play on the blacktop” said Dixon.

Like many key figures in the culture the focus of the crew and their mission is to change lives and really work in the communities, asking the people what they need and not assuming what they want. There is a huge and extremely important difference between the two.

Dixon along with his Co-CEO and team have revamped the historic AND1 Tour with a new name and a few new rules and regulations. A move that modernizes Streetball as a whole. The plan includes a minimum 15 City Tour in 2023 which will feature the 1st Streetball Draft. 12 initial Franchises- Each owned by original AND1 Player(s) will select from 10-15 Players from each city who enter the draft. The Leagues Rules and Regulations/History/Understanding of Streetball will be highlighted in the soon to be released booked “Streetball for Dummies”.

The Leagues Kick Off Event/Festival will feature a Full Size Court that will take up the entire Street in front of City Hall, Newark NJ   920 Broad Street on August, 20th 2022. According to Dixon and League Reps, “Wealth to Black and Brown Communities is a major focus. We will give communities an opportunity to own a piece of franchises in the league. We also plan on building Streetball Stadiums owned by the community; the opposite of gentrification”.

The event will focus on 4 Major Highlights: 1 on 1 Countdown (5 seconds to score), Blacktop Rough (No Foul, No Help, Everyone For themselves), Blacktop Slam Dunk Contest (New Rules-Dunkers from around the World), and a Full Court Run with Blacktop and Newark’s Neighborhood Basketball Players hosted by Champ NDO, Al Cash and others.

This is shaping up to be a much needed cultural platform with plans for growth and success! Streetball definitely means a lot to the world and definitely the culture!

Tyler Perry to Release ‘A Jazzman’s Blues,’ the First Screenplay He Ever Wrote While Homeless in 1995