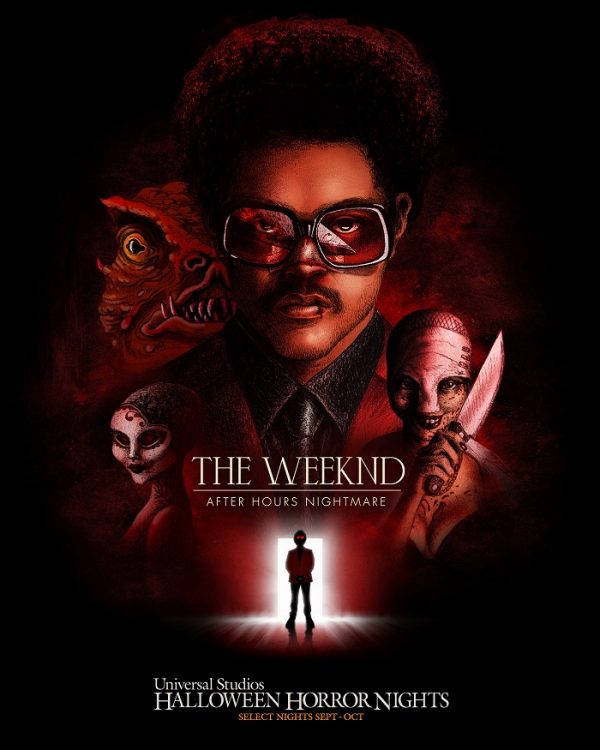 The Weeknd is known for creating unique music that combines audacious, provocative lyrics with cutting-edge sounds and menacing undertones. The Weeknd’s fourth straight number-one album, After Hours, produced a series of top-charting singles, including “Too Late,” “Heartless,” “In Your Eyes,” and the hugely successful song “Blinding Lights,” which Billboard named the greatest Hot 100 hit of all time. Select songs from the compelling album are being transformed into a horror movie soundtrack for Halloween Horror Nights’ obscenely eerie experience this fall.

“I always wanted my own Halloween Horror Nights haunted house as Halloween has always been significant to my music, so this is a total dream come to life. I feel like my music videos have served as a launching pad for a collaboration like this, and I cannot wait for people to experience this madness!” said The Weeknd.

The brand-new Halloween Horror Nights haunted houses on both coasts will be infused with the sinister undercurrent that drives The Weeknd’s mysterious persona. Visitors will enter a surreal living nightmare with grotesque characters and themes inspired by The Weeknd’s music and short films while the spooky sounds of “After Hours” echo throughout the experience. Guests will be challenged to survive the night while trapped within the terrifying, unexpected world of “The Weeknd: After Hours Nightmare” – a place that only exists in The Weeknd’s vivid imagination and from which one may never escape. They will be stalked by slashers, bandaged maniacs, gruesome toad-like creatures, and other unfathomable horrors from the artist’s mind.

“We are thrilled to take guests inside of the mind of The Weeknd, who is a Halloween Horror Nights fan himself,” said John Murdy, Executive Producer of Halloween Horror Nights at Universal Studios Hollywood.  “This is an unprecedented haunted house that is going to shatter the expectations of our guests and immerse them in an unforgettable experience that is equally unexpected and terrifying,” added Charles Gray, Senior Show Director for Entertainment Creative Development at Universal Orlando Resort.

Halloween Horror Nights at Universal Orlando Resort starts on Friday, September 2, and all tickets are currently on sale. Online discounts are available for single-night tickets, as well as a number of Frequent Fear Pass options that let visitors experience the horror for several nights.

You can get a preview of the experience below.

Tyler Perry to Release ‘A Jazzman’s Blues,’ the First Screenplay He Ever Wrote While Homeless in 1995