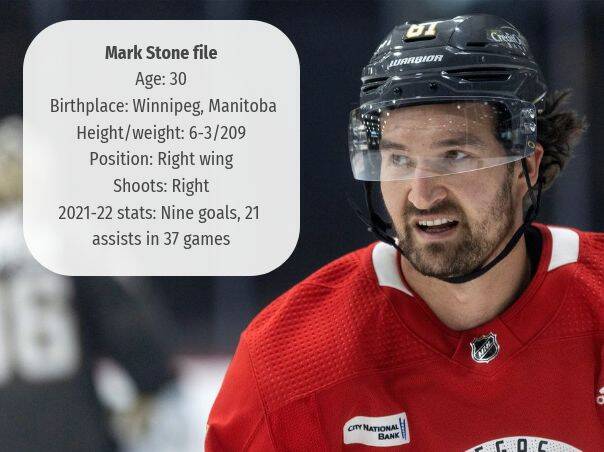 Golden Knights’ Mark Stone confident back will hold up

Mark Stone wasn’t taking reps off after undergoing back surgery in May. He wasn’t going through the motions. He was pushing it. The Knights captain was even staying late to get in extra work.

“You wouldn’t even think he was hurt last year,” Stephenson said.

The Knights hope Stone looks the same when the regular season begins. He was out 45 games last season and was missed. He’s more than an outstanding two-way player. He’s the team’s heart. His passion and energy rub off on the rest of the bench.

Stone is confident he will remain healthy. An NHL season will put that to the test, but he said he’s feeling “night and day” better than before.

“Getting it fixed was definitely something I needed to do,” Stone said. “I spoke to a lot of the guys around the league who have done it. They’ve said it’s the best decision they’ve ever made.”

Stone said he first had his back checked after the Knights lost to Montreal in the 2021 NHL semifinals.

He had an MRI, but it was determined he could just rehab in preparation for the upcoming season It took two games for things to go wrong. Stone exited the Knights’ 6-2 loss in Los Angeles on Oct. 14 with 8:57 left in the second period after experiencing nerve pain.

Stone missed time every month. His 37 games played were his lowest since he was a rookie in 2013-14.

He had two points in his final nine games while trying to push his team into the playoffs.

The Knights’ early offseason gave Stone time to look at treatment options. One person he leaned on was former Ottawa teammate Jason Spezza, who had the same surgery as Stone when he was 29. Spezza, now 39, had more than 60 points each of the next three seasons. He played another 715 games before retiring in May.

“Definitely encouraged to see other guys’ stories,” Stone said. “If I take care of myself the way I know I’m going to, I should be able to play a lot more games in this league.”

Stone underwent surgery May 19 at Cedars Sinai Marina del Rey Hospital in Marina del Rey, California. He said the first week “sucked” while the incision healed. The first month was boring because he couldn’t do much.

“I kind of felt like a dog a little bit,” Stone said. “Just getting excited for my 45-minute walks a day.”

He started seeing the benefits of the surgery when he was allowed to move around more. He took part of captain’s practices with his teammates. He was on the ice for the first day of training camp in a no-contact jersey. He started participating fully by Day 5.

Stone kept checking all the boxes to show he’s ready for the season. Now he just needs to prove he’s the same player who finished ninth in the Hart Trophy (MVP) voting in 2021.

Even with his back injury, he scored 28 points in his first 28 games last season. His game has never been about his physical gifts as much as his intelligence on the ice. He has a gift for anticipating plays and creating turnovers.

“It’s almost like he’s inside of the head of the defenseman going back on the puck,” coach Bruce Cassidy said. “He’s a bit of a ghost that way when it comes to his forechecking ability. That’s just a special talent.”

Stone’s affect on games was obvious last season. The Knights outscored opponents by 20 in the 37 games he played. They were plus-2 in the 47 he didn’t.

“He hasn’t had any setbacks or anything like that,” Stephenson said. “Foot on the gas for him.”