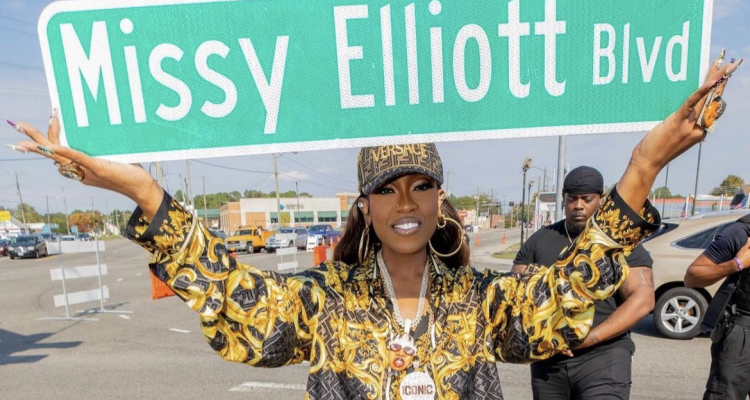 The Source |Missy Elliott Celebrated And Honored In Her Hometown of Portsmouth, VA

The city of Portsmouth, Virginia honored hip hop legend Missy “Misdemeanor” Elliott with the key to the city and a street naming ceremony on Monday. The five-time grammy award winner and Virginia Native Missy Elliott returned home to receive the honor from The State of Virginia, which has declared October 17th as “Missy Elliott Day”.  Elliott, her family, and friends like Timbaland and Pusha-T both Norfork, VA natives were treated to marching bands from Hampton University, Elizabeth City University, Manor High School, and Norfolk State University’s marching band who performed a mix of the mega stars hits.  The parade lead-up to a ceremony that presented Elliott with a ceremonial key to the city as well as renaming a portion of McClean Street Missy Elliott Blvd. City leaders which included Congressman Bobby Scott and Gov. Glenn Youngkin unveiled the covered sign, as nearby thousands of fans filled the seats of Manor High School to help celebrate the milestone alongside the hip-hop icon from Portsmouth.  “I have always been told to dream big. I couldn’t have dreamed this big. Though I have accomplished many things, I have won many awards, but this trumps all when you get the love from your home,” said Elliott. Missy grew up in Portsmouth, VA where she became active in her church choir before forming the R&B group Sista and rising to fame. The ceremony was held at Manor High School, where Elliott graduated in 1990.  “Just being from Virginia, she was the first one of my peers I seen get up and go,” Pusha T said. “She’s always been an inspiration to me for that.” Elliott showed her excitement and made the announcement in an Instagram post that read: “ATTENTION🚨🚨🚨MISSY ELLIOTT BLVD is on the Google Map🙌🏾🙌🏾🙌🏾 #VA baybeeeeee🙌🏾#757 P-TOWN  WAIT🥹 a WHOLE BLVD!🙌🏾 God is good! I am not perfect & I’ve had ups & downs when some doubted me & thought I would give up I PRAYED & got back up everytime🙌🏾Hopefully this will INSPIRE some1 else to KEEP PUSHING! #757 804🙌🏾⬆️🔥” Check out the highlights of the day below.