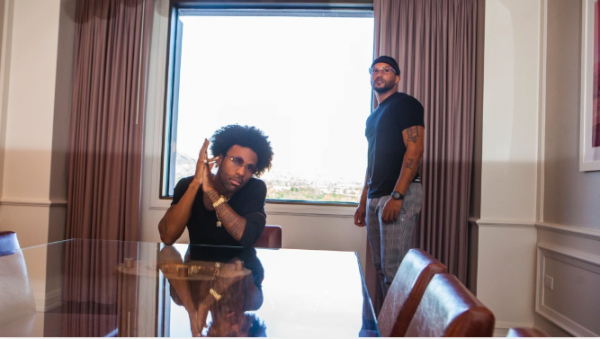 Recently news that Kanye West allegedly dumped a whole bunch of his ‘White Lives Matters’ shirts among the homeless population down on Skid Row in downtown Los Angeles. Apparently Ye can’t sell his shirts because two blackmen have trademarked the slogan. Capital B reports that two radio hosts — Ramses Ja and Quinton Ward, who helm the show Civic Cipher out of Phoenix, Arizona — are the owners of the “White Lives Matter” trademark.

Ramses Ja and Quinton were gifted the trademark from a longtime, anonymous listener of their show, Civic Cipher. The listener procured ownership of the phrase early last month to ensure it didn’t fall into the wrong hands, and offered to transfer the trademark to Ja and Ward in September. It officially entered their possession on Oct. 28, giving them sole ownership over the phrase and the ability to sue anyone who uses the saying for financial gain.

“The way the law works is either you’re owning phrases, or it’s up for grabs for people to make money off them,” Ja told Capital B. “This person who first procured it didn’t really love owning it, because the purpose was not necessarily to get rich off of it; the purpose was to make sure that other people didn’t get rich off of that pain.”

The anonymous owner believed that the social-justice-oriented radio hosts, whose show is nationally syndicated, would be able to leverage the phrase for Black causes, such as helping to inject funding into local chapters of Black Lives Matter and the NAACP. Coincidentally, just as the trademark was transferred into Ja and Ward’s hands, Ye began his weeks-long tirade promoting anti-Black and antisemitic beliefs.

Earlier in October, Ye and Candace Owens wore “White Lives Matter” T-shirts, which Ye claimed he would sell. A few days later, he dropped off dozens of the shirts at homeless encampments in Los Angeles’ Skid Row, home to the highest concentration of unhoused people in America. In the weeks since, Ye has lost more than $1.5 billion worth of partnership deals as a handful of groups have threatened to sue him for racist and bigoted comments, including the family of George Floyd. Ye publicly, and incorrectly, claimed that Floyd died from a fentanyl overdose and was not murdered by former Minneapolis police officer Derek Chauvin.

Now Ja and Ward, whose radio show addresses the intersections of racial justice and hip-hop, are forced to face the fallout of owning one of the most recognizable racist phrases in contemporary culture.
Thoughts?

If You Are For Gangsta Rap, You Can’t Also Be For Black